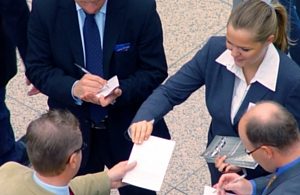 Though it continues to baffle those who know me personally, I can be quite introverted around strangers.

I feel it is important to tell you this because I know where you’re coming from, Ms or Mr Shy Networker. I also know it can be… changed. I don’t want to use words like “beaten” because that implies that it’s an inherently bad trait to have, which it isn’t. That being said, it does get in the way somewhat when you’re trying to network and have your voice be heard.

So let’s take a look at getting that voice into some earholes.

Before we begin, there are two preparation steps that you can take. If you are reading this the night before a big networking event, only the first is realistically open to you, though you may want to bear the second in mind for future.

Our first step is to swot up on the science of power poses. Social Psychologist Amy Cuddy explained in her fascinating TED talk that pulling a strong, dominant pose heightens your feelings of strength and confidence. It sounds weird, but she explains it far better than I do. So pull a Wonder Woman stance (or He-Man if you prefer) in private before you take the plunge. It might seem silly, but hey, it can’t hurt! This talk will also help out with one of our later steps too.

This is the one that isn’t much use to you if your event is taking place tomorrow, but here it is: try speed networking. These types of events use the same concept as speed dating (so I’m told…). You get 1-3 minutes to talk about your business, and the person you are seated opposite gets 1-3 minutes to talk about their business. Then everyone moves around. Shy, budding networkers could find this useful because they are usually smaller groups of around 16-30 people, and no icebreakers are required. The whistle goes and you talk. Still sounds a little scary, I grant you, but you don’t have the stress of going up to the person, gauging what they’re like, shoehorning your business into the conversation – there’s none of that. So seriously consider it for practicing your networking. There are a number of groups up and down the country offering networking events for free, so it pays to find out what’s going on in your area.

OK, So Here’s the Actual Steps

1. Stick with Those you Know

Hopefully you have someone in your life who would benefit from business networking. If it is possible, ask them to accompany you. A little moral support goes a long way, but don’t get stuck talking to them instead of other people, that defeats the purpose of networking. Explain to them your fears about networking, and arrange to make a pit stop with each other every so often in order to recharge your social batteries with someone you’re more at ease with. If you don’t know anyone to accompany you, then do your research about who is attending, so at least you know a little about who’s going to be there. If you find out that you do know someone who is attending, such as a previous client or a service provider you have worked with, try and hunt them down and ask for introductions to get your social juices flowing.

2. Objects in the Mirror are Less Observant than they Appear

This is the main thing that I had to get my head around when I started networking: you aren’t under the intense scrutiny that you think you are. If you’re anything like me, you notice minute social cues in motion and language; and saying the right thing, in the right way, with the right body language, suddenly becomes such an intense pressure because you assume everyone else is noticing things to the same extent as you.

But here’s the thing: they’re not.

They’re possibly just as worried about how they come across to you than vice versa, they could just be good at hiding it. Hopefully by realising this and taking it on board, you’ll be able to loosen up a little. Yes, embarrassing moments may happen, but they can happen anywhere.

The main benefit of being an introvert is the innate ability of being a great listener. So if you’re stuck for conversation, start asking the other person questions. They don’t even have to be questions about business, networking is about building relationships, not the hard sell. This is also useful if you haven’t got your pitch right yet. Another good point to make is not to force eye-contact if it doesn’t come naturally to you. You will only make yourself seem more ill at ease to the other person.

If during the course of a conversation you realise it isn’t going so well, it’s perfectly OK to politely excuse yourself to mingle elsewhere. Don’t be hard on yourself though, conversation is just as much about them as it is about you, and there are some people out there that you genuinely won’t gel with. It may sound harsh, but if you have absolutely no connection with the person then they will be hard for you to work with; so let them find someone else who’s a better fit for them, so you can find someone who’s a better fit for you.

5. Seek Out Your Shy Brethren

Shy folk aren’t rare. Chances are there will be other introverted people also at the event. Try to seek them out, it may give you both the boost you both need to start talking to others. This is where we need to refer back to Amy Cuddy’s talk – look for people with closed, introverted body language. So boot up that shy-dar and look for your peers. An awkward shy conversation about business is still a conversation about business.

Not forgetting your business cards may seem a strangely obvious piece of advice for attending a networking event, but the age old card-swap is an instant icebreaker. You immediately have information about the person, their name, what they do, the name of their company, their position within the company, even subtle things about the company’s ethos that can sometimes be picked up from branding. If you don’t quite understand what they do, that’s something you can ask. If you like the design or finish of their card, that’s another question. For such a small and unassuming piece of dead tree, the humble business card is a super useful social tool.

Yes, this is another piece of advice that’s trotted out ad infinitum, but only because it’s so true. Trying to be something you’re not only ends in disaster. So at the end of the day, just be your normal, lovely self; with your own likes, wants, skills and expertise. As Marie Forleo says “the world needs that special gift that only you have.”

One of the most important things to do after a large networking event is to follow up with people. Surprisingly few people actually do this and I think they’re missing a trick. What’s better than one opportunity to sell yourself? Why, two opportunities to sell yourself, of course! It’s time to put those business cards you’ve collected to use. Drop them an email the evening after the event, or the next morning. If you prefer using the phone then give people a call a day or two after the event. Again, it doesn’t have to be all about the hard sell. Nurturing a relationship can be much more valuable than making a sale.

Is shyness stopping you from networking? Our 7 (and a bit) handy steps can help. Click To Tweet

Got any tips of your own that you’d like to share? Leave them in the comments below!