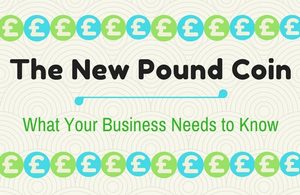 In less than a month, a new pound coin will hit circulation. If you run a business that operates with cash, you need to know what’s happening, why – and most importantly – how it will affect your business.

The Royal Mint have provided a wealth of information for business owners to get up to speed ready for the change, so let’s dive right in!

Why Change Our Pound Coins?

We may not have all come across a counterfeit banknote in our time, but most of us will have seen a dodgy pound coin. The soon-to-be “old” pound coins have become incredibly easy to forge; they were first issued in 1983 when £1 notes were phased out, and counterfeiting practices have become a lot more sophisticated since then. This makes the pound coin in its current form particularly vulnerable to forgery.

The Royal Mint estimates that 1 out of every 30 pound coins in circulation are fake. However, the new coins have a number of features that make them far harder to copy; so much so that the Royal Mint is calling it the “most secure coin in the world.” The intention is of course to curb illegal counterfeiting, but to also reduce the costs that forgeries inflict on businesses and on the taxpayer.

The new pound coin can be described as follows:

The new pound coins will be entering circulation on the 28th March 2017. This will mark the start of the “co-circulation period.”

What this means is that for around 6 months, both old and new pound coins will be legal tender. The last day of this co-circulation period will be the 15th October 2017, after which the old coin will no longer be considered legal tender.

What Happens When Co-Circulation Ends?

The Royal Mint states that following demonetisation on the 16th October 2017, old pound coins can still be deposited into an account at a Post Office or with a number of high street banks, though they do advise that you check with your bank for more details such as deposit limits, etc. The Royal Mint encourages you to avoid this problem by using or returning your old coins in advance of the 15th.

By this date, all of your coin-handling machinery will need to accept the new coin. As of the 16th October 2017, you should not hand out the old pound coin, and you are under no obligation to accept the old coin from customers.

If your business is cashless, you don’t need to worry. However, it may be worth considering how much you rely on cash in your day-to-day running, no matter how little. Do you run any vending machines for staff or customer use? Do you keep any petty cash? It’s worth objectively taking stock of the exact role that pound coins play in your business so you can be prepared.

Also, forearm yourself with all of the information available from the Royal Mint on the New Pound Coin’s website.

With all of that in mind, let’s get to the advice:

Information and training resources about the new pound coin can be found over on the New Pound Coin website.

For more information, please check out the links below:

The official website for the new pound coin: www.thenewpoundcoin.com

The new pound coin on the Royal Mint website: www.royalmint.com/newonepoundcoin