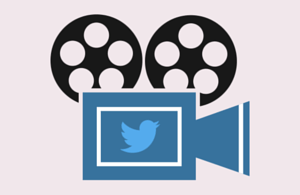 Previously, the platform had only offered 30-second clips.

It’s been a depressing few years for Twitter as new platforms steal the hearts and minds of younger audiences.

New user numbers have been in decline since a 2010 peak and are now in the negative for the first time ever.

So why video? Twitter reckons video tweets have increased by 50% since the start of 2016 – which I would guess has something to do with them launching GIFs. We want moving pictures on Twitter now. We’ve gotten spoilt.

Twitter owns Vine and Periscope (I’ll leave it up to you to decide whether these are successful video platforms) and recently acquired Magic Pony, a video tech company that will improve the quality of Twitter’s videos by smoothing recognised patterns and textures. That IS magic.

I think this investment (around $150 million) in real-time, algorithm-based video improvement hints that Twitter may be hoping to big up live video like Facebook has. As it owns Periscope, part of most people’s lives purely for the legendary Drummond Puddle Watch, it would make sense. I could definitely have done with more quality on that puddle.

“We’re focused now on what Twitter does best: live. Twitter is live: live commentary, live connections, live conversations. Whether it’s breaking news, entertainment, sports, or everyday topics, hearing about and watching a live event unfold is the fastest way to understand the power of Twitter. Twitter has always been considered a “second screen” for what’s happening in the world and we believe we can become the first screen for everything that’s happening now.”

[As an aside, I just Googled the Drummond Puddle Watch and a suggested search was ‘drummond puddle water ebay’. We are at the end of days.]

Well, of course. Another wild flail for attention sees Twitter suggesting videos for your delectation. You’ll probably have seen tweets in your timeline from people you definitely don’t follow – accounts people in your network have interacted with, for example. Videos will soon get similar treatment, with suggested clips featured beneath any video tweet you expand.

More mindless rabbit hole-ing for users but hopefully better circulation for businesses trying to get their videos seen.