Is the grass really greener? New research reveals how much better (or worse) off you could be in another country 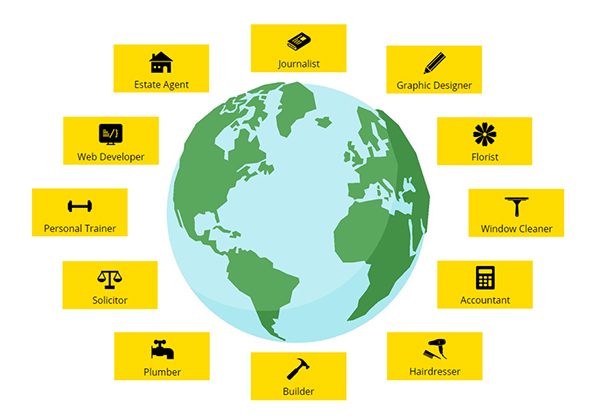 The worldwide earnings of 28 of the most popular career choices have been revealed by Yell Business. Detailing international average earnings for roles ranging from an accountant to a bricklayer, Yell Business has filtered each salary by the local cost of living, to truly answer the question: "Is the grass really greener?"

Employees and small business owners alike could be in for a shock when learning just how much better (or worse) off they could be for their career choice in another country. For example, a switch to Switzerland for UK graphic designers could see them become £11,471 better off each year (and that's after taking the notoriously high Swiss cost of living into account!)

Elsewhere, UK tradespeople fare slightly better, with UK plumbers only better off in four of the other 24 countries. A plumber considering a move to China could take home close to an extra £6,000 per year (an average of £5,927). When it comes to bricklayers, there's five countries in the research where they'd find the grass genuinely greener. For example, a bricklayer opting to move across the pond to the USA could take home an extra £7,700 per year.

While some of the biggest changes to equivalent earnings are seen in further flung destinations, a simple trip across the Channel for some roles, can still put some extra cash in your wallet. Relocating to France could see UK accountants adding almost £9K to their yearly finances, with their equivalent earnings averaging at £45,328, while the UK's are £36,561.

"Our aim is to help small business owners from across the UK make the most out of their choice of trade. By looking at how equivalent earnings from around the world differ and how the UK stacks up against them, we aim to arm those who may be thinking of relocating with as much insight as possible as to the salaries and expenses they can expect across the world.

To get a clear idea of these differences in worldwide earnings, we wanted to add in some popular career choices, alongside common small business choices such as plumbing, hairdressing, builders and florists.

At a time when people may be considering career choice and where to live, this research can help people at any age see where they stand against the national average, and decide whether the grass actually is ‘greener’ for them in other parts of the world".

Have a look at Yell's career table which allows you to select your career choice and instantly see how your equivalent earnings stack up against average salaries from 25 different countries, with the data considering average salary, filtered by cost of living.

Cost of living index sourced from https://www.numbeo.com/cost-of-living/ in November 2019.  All salaries converted to GBP using correct conversion rate on the 28th October 2019.

Yell is No.1 for managed digital marketing services for all types of local businesses in the UK*. Its goal is simple; to connect consumers and businesses online. Yell.com now provides advanced tools to support consumers in their search for suppliers, including ratings and reviews, mobile apps and social media sharing. Yell is one of the largest resellers of Google Ads in the UK and provides a range of fully managed digital marketing services for businesses including Pay Per Click, Websites, Display adverts, Social media and directory listings. Over 130,000 businesses currently advertise with Yell, and Yell.com is used by millions of consumers every month.