On Friday 18th January 2019, the final copies of Yellow Pages were delivered in Brighton, the city where the book was first published in 1966. The delivery marks the end of an iconic staple of British household history, and completes Yell’s transition to a fully digital business.

To celebrate the occasion, James Nesbitt, star of some of Yell's most famous TV adverts, visited two customers that have been advertising in the famous directory since its very first issue. James also hand-delivered a few copies of the final edition to some local residents around Brighton.

Since launching, Yellow Pages has been delivered to over 27 million UK households, with almost one billion copies printed over its 53-year run. During this time, in excess of a million independent businesses have advertised in the books, from local hairdressers and plumbers, to artificial eye merchants.

The brand was also responsible for some of Britain’s most well-remembered TV adverts, including consumers’ favourite ad of the 1980s (according to Marketing Week and YouGov poll) JR Hartley’s ‘Fly Fishing’. The brand then moved onto a campaign which launched in 2003 starring James Nesbitt as a hapless character who uses the Yellow Pages to get himself out of some tricky situations.

On being involved in the final Yellow Pages delivery, James Nesbitt said; "I’ve had a great time chatting to two of Yell’s longest-serving customers and delivering the final copies around the city of Brighton. Yellow Pages is such an iconic piece of history - almost every household including my own had one by their telephone, and it helped to connect us to local businesses in our towns and cities. The Yell brand has been great to me through the years, I thoroughly enjoyed filming the adverts and I’m really honoured to have played a part in their final delivery of Yellow Pages too". 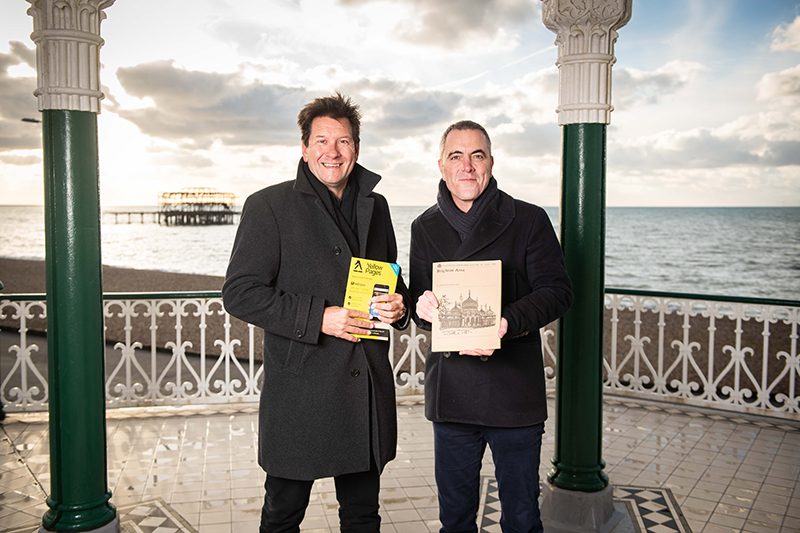 Chief Executive of Yell, Richard Hanscott, said: "What better place to deliver the final edition than the city where it all began, and who better to help deliver them than James Nesbitt? James has played a big part in Yell’s history for his part in our iconic TV adverts, with our "Haircut" and "Yoga" adverts being remembered as some of the most memorable TV adverts in the UK.

"The book itself will undoubtedly always be remembered, and after over 50 years we’re extremely proud to say that we still have customers who have been with us since the very first directory, and they continue to advertise with us online. While goodbyes can be hard, we felt this was the right time to end the printed Yellow Pages and we look forward to continuing our business directory online with Yell.com”.

Following the final deliveries, customers can still access the same services and directory information online at Yell.com, or via the Yell app. Instead of the physical Yellow Pages, Yell offers a free listing to businesses on Yell.com along with fully managed digital marketing services such as websites, video, Google Ads, Facebook advertising and more.

Yell is No.1 for managed digital marketing services for all types of local businesses in the UK*. Its goal is simple; to connect consumers and businesses online. Yell.com now provides advanced tools to support consumers in their search for suppliers, including ratings and reviews, mobile apps and social media sharing. Yell is one of the largest resellers of Google AdWords in the UK and provides the full range of digital media and managed services for businesses with Pay Per Click, Websites, Display adverts, Social advertising and directory listings. Over 130,000 businesses currently advertise with Yell, and Yell.com is used by millions of consumers every month.