Although big brands have the budget to research, plan and implement a tone of voice, they don’t have freedom.

A small business can decide what it wants to be and really live its tone in everything it does.

No shareholders to please, no board to seek approval from – freedom.

Here’s some businesses that are really riding that freedom:

Hoxton Street Monster Supplies have this tagline: “Service with a snarl since 1888”. The shop sells what it sounds like it sells: supplies for monsters. It’s the only shop of its particular trade in London, if not the world.

The shop is run by volunteers and 100% of the profits fund the nearby Ministry of Stories, a charity that helps London children and teenagers work on their writing.

An incredible cause, especially if you’re a grownup writer who wishes they’d had a monster shop to learn in.

My favourite thing about HSMS – apart from their work to grow little imaginations – is their tone of voice. It is spectacular.

HSMS call your shopping basket a casket. They accept PayPal but not magic beans or human sacrifice. Their charitable setup is due to an old curse. Seriously, just take my money now.

[I did actually donate at this point – I set up a £3 a month standing order and willingly joined their mailing list. Do you see what a powerful tone of voice can do?]

One of my favourite features is a language option where you can change from human to zombie (arrrghhh urrgghh), werewolf (aawwhoooooo), mummy (hieroglyphics) or vampire bat (upside down). 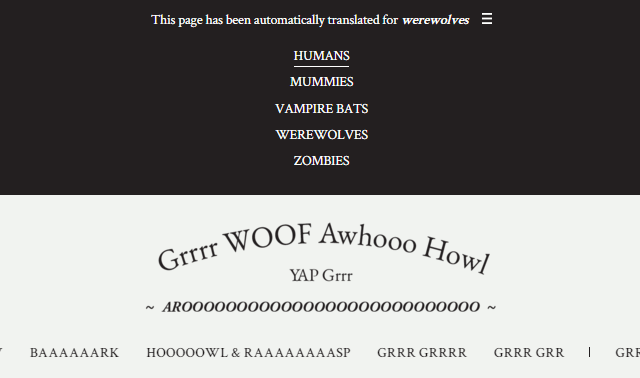 A couple of days after setting up my donation, a lady called Ruth emailed me to say thank you and ask if I’d like to come and visit the shop, as she could see I was a writer myself. This is the kind of thing that delights me about small businesses: if they sound lovely it’s because they are lovely, not because a brand manager has strategised it that way.

“We were recently voted ‘No. 1 Kids’ Shop in London’ by Time Out Magazine. Which is strange, as we’re evidently a shop for monsters.”

“Due to a rather inconvenient curse, all profits go to the Ministry of Stories, a creative writing and mentoring charity for young humans.”

“We are tragically unable to accept beans (magic or otherwise), and no longer accept human sacrifice. However we do take the following payment methods via PayPal:”

BrewDog are a small brewing company and a case study in cool branding.

In fact, they have a marketing guide called ‘Business for Punks‘ which is all about chucking out the rule book to build a non-boring brand. 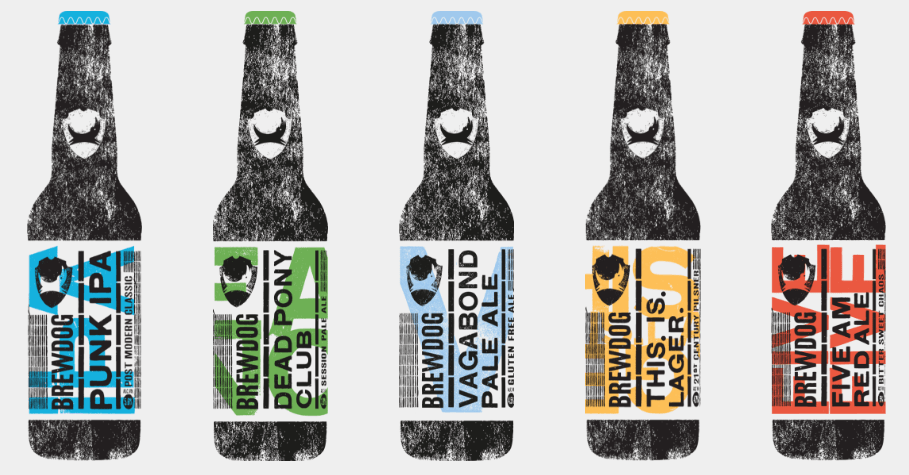 Brewdog use simple, typography-heavy styling and unapologetic tone of voice to great effect. They seem like some guys you might meet at a small gig and become best mates with.

Words and phrases like die-hard, beer geek, dry-hopped to hell, kickass and punk create the feeling of being part of a really awesome club just for people in the know. It’s quite masculine but it doesn’t feel alienating to women either, which is tricky to pull off.

BrewDog operate with customers very much involved in the business. From offering equity (an invitation to be a real member of the club), to selling exclusive prototypes of their beers, to their little brewery bars, they’re a brand you can feel a part of. BrewDog is a lifestyle – and that’s great marketing but it requires 360° focus on brand values.

Not everyone can be a BrewDog, but we sure can try.

“Don’t waste your time on bull sh*t business plans. Ignore advice. Burn market research. Put everything on the line for what you believe in.”

“All we care about is brewing world class craft beer; extraordinary beers that blow people’s minds and kick start a revolution.”

“We masterminded the UK’s strongest ever beer, Tokyo. This resulted in a huge media storm, and if you believed the headlines, the downfall of Western civilisation.”

This is a wildcard – a true small business. Barton’s is in Leatherhead, the town where I work. It’s a beautiful half-timbered building right by a bridge over the river Mole.

The website is nothing fancy (it looks like it was built about 10 years ago and probably was – but hey, we know that’s not a deal breaker) but the voice of the owner comes through just perfectly. This is a business that isn’t writing to rules about marketing; they’re getting it right because those rules were based on real talk – and Barton’s is the real deal.

Their Facebook page is a delight and everything reads, looks and feels like the genuine and much-loved gem that a small business should be.

Having looked up the website out of curiosity, I then went to visit and found that exact tone everywhere in the shop, and behind the counter. It was that whole 360° brand experience again – but not as a strategy, just as the way things are done at Barton’s. The owner, Peter, told me: “You’ll be having a conversation about a book and a voice will come from the back of the shop saying ‘I’ve read that!’” and that’s what happened to me. Peter was talking about children thinking apostrophes aren’t important anymore – and I couldn’t resist joining in on that one, could I?

Peter also told me about a local literary festival, asked me about my writing and gave me advice on which book I should buy about the Mitford sisters. He told me to buy the cheaper one. That’s what it’s all about.

“People often ask me why we are called Barton’s. I had been managing Corbett’s Bookshop in the Swan Centre, Leatherhead for 10 years; when this was put up for sale my wife Josephine bought it to ensure I had a job. After all who else would employ me?”

“We are not an especially earnest [book] group and do not tend to worry books to pieces by deconstructing them to lay bare their bones.”

“Those of you who are able to visit our shop can enjoy a free cup of freshly-brewed coffee and sit on the Chesterfield by the inglenook fireplace with Henry our giant 35 year old teddy bear.”

So what makes these voices so good?

All three of these companies are more than a product and a website: they’re a community. Having a culture around your business not only gives you something to talk about in your social media; it makes you a genuinely valuable presence in people’s lives.

These small businesses are madly passionate about what they do. Hoxton Street Monster Supplies is built on imagination and the drive to help children be writers. BrewDog is built on two men’s obsession with craft beer. Barton’s is built on a community of book lovers and – from what I saw – an encyclopaedic knowledge of literature.

If you’re going to have a clear tone of voice, you might as well commit. Look at packaging for Innocent or Supernoodles; you’ll see that their small print is as engaging as their advertising.

One of my pet hates is a business that sounds all nice in their headlines, then drops it all for admin-y web pages or even – horror – emails or customer service.

Don’t break character for anything or anyone.