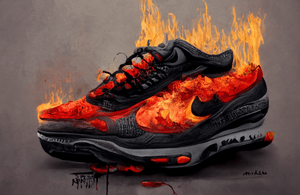 Most of us will have come across a tweet or Facebook post claiming ‘I forced a bot to watch 1,000 hours of [cultural reference] and this is what it wrote’ along with a clearly human-written parody.

We think bots will always be inferior to human creativity, making hilarious gaffes when they attempt it.

But now, we’re starting to see something far more interesting and…disturbing. AI art has been around for a while but a new beta for MidJourney has just become available, letting more of us into that world.

Artificial intelligence can be used to suck in tonnes of data, then sort it into patterns. The AI learns that a black and white animal with four legs could be a cow, dog or cat by process of elimination and lots of machine learning. It keeps getting better.

An AI created to make art has this knowledge, and can combine what it knows into new forms. So, give it the prompt ‘circus dream clown balloons red white pink’ and you might get something like this:

MidJourney (which I used to create that image) is an art AI that lets you iterate. The AI will generate its best shot and you can refine it until, really, you have created art. It’s a weird kind of medium, but it is, after all, your vision that creates the idea and your eye that does the refining.

I’m in a Discord channel for MidJourney and I can see people learning how to interact with this AI in real time. It’s incredible how it reacts to different prompts, like ‘in the style of Dali’ or ‘1990s breakfast cartoons’. It has all of culture at its fingertips, so the potential imagery is mind-boggling.

What does AI image generation mean for small businesses?

For one thing, the emphasis is on vision and not on skill. Although I’d never recommend ditching your graphic designer, if you wanted to run a campaign with a lot of drama and impact, this is an incredible opportunity.

Yeah, it’s weird, and it takes a lot of fine-tuning – but this gives you access to ART, for next to nothing. MidJourney will give you a free beta trial and then it’s a monthly subscription with different levels depending on your intention.

To show you a more sophisticated and potentially commercial use of MidJourney, here’s Jeff Han’s work:

He uses very recognisible pop culture imagery, and you can actually see a brand like Nike using this. Obviously, his style is very apocalyptic but you can use colour and light prompts to create less threatening images.

If you have a product on the internet, the MidJourney AI will ‘know’ about it and be able to put it into your images.

To try to create something verging on usable as an ad, I led the AI by including the words ‘advert’ and ‘positive’ in my prompt as well as the brand and product name (Dyson V7 Animal Cordless vacuum cleaner).

Its first go was a bit too odd, so I tried again with the product name in speech marks so it knew that was one single thing.

Yes, it’s still weird to look at and a bit dark. But I spent one minute on the prompt (I could give it something like ‘dog’ instead of the generic ‘animal’) and five minutes on the refinement, so considering that, I think anyone can see there’s potential here.

OK, I had to test that, so here’s the version with ‘animal’ swapped for ‘dog’:

Cute – it even tried to put in ad copy this time. Bless its heart. But now these are actually starting to look like Dyson ads, if Dyson wanted to bring a little psychedelia to its advertising. I haven’t tested this, but I would image MidJourney would recognise colour codes in prompts, so you could include your brand colours.

How you could use AI image generation

It’s an amazing tool and a great way to get creatives thinking differently about composition and combining ideas. If you’re feeling brave, it could even be your next ad campaign.