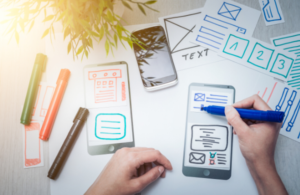 Isn’t a big splash better than lots of little app releases no one notices?

You’ve got big plans for your app and you’re proud of all the awesome stuff you’re going to release. Of course you feel like it should be a huge, international announcement with a party. Maybe an ice sculpture or two.

A big release means more to talk about, more impact and more shiny stuff to report to the board. But it’s just that: one big bang. And as my boss likes to say: big bangs have a habit of going bang.

It’s riskier. There’s more pressure and attention on it. And then it’s over.

The case for iterative app releases

1. Testing with each app release

We can and should test after each release, gradually refining our UX.

Iterative app releases give us something to talk about on social media. This approach to development make us look like we’re buzzy and doing continual dev. Think Monzo: they have an entire culture around their continual dev work.

Gradual app releases mean we don’t have a whole new app all of a sudden – which can alienate people. Think about what happens when Twitter dares to release a new look for its feed. Twitter is Twitter: those devs can get away with it. A smaller business needs to consider the impact on its users.

Change blindness is the phenomenon of not noticing something that should be extremely noticeable because our attention is elsewhere.

There’s that famous example of a gorilla dancing through a scene but being rendered invisible by the human brain’s instinct to 1) focus on what seems most important (exploited as redirection in magic shows) and 2) only see what is expected; the brain saves power and time by showing us what it expects to be there – it’s a short cut.

So, in our app, our user is most likely to focus on what they came to look at and exclude other features. They’re also likely to miss things that weren’t there before because their brain places more importance on what’s always been there.

Continually updating your app with small changes sounds annoying. But in actuality, these additions probably won’t be noticed until a person NEEDS them; they may not even know it wasn’t always there.

If you actually WANT your users to notice some particular features, send them a push notification leading to a blog about it or animate the change on first app-open so their attention is drawn to it. Otherwise, try to rein in your own pride in your app release. To your user, it’s inconsequential. (Sorry.)

Small pings over one big bang for app releases

Your app should be easy to use. That’s your foremost goal. A big app release is mostly not about benefiting your user, so ask yourself why you want to go for the big bang.

Small pings are better for your user and your business long-term.