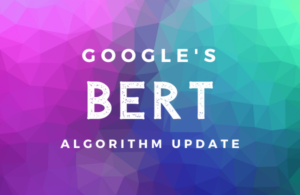 In October 2019, Google’s BERT algorithm update rolled out to all searches, all languages and all countries. BERT is natural language processing (NLP) technology, which grows Google’s understanding and treatment of context.

Prepositions – like to, from, on – are now a big focus. Tiny words, often overlooked but hugely important for nuances like ‘train times to London’ vs. ‘train times in London’.

Google could guess at this context from your location, but you don’t always want train times from the place you’re IN; you might be in Brighton looking up train times for your little sister who’s stuck in London with no mobile data.

In short: BERT is Google’s next step in AI and human search.

Where BERT’s come from

Prepositions didn’t feature. We dropped them to speak Google’s language. Things have come on a lot since then, but now prepositions are coming to the fore.

Because there’s a big difference between comedian in Bristol and comedian from Bristol, but we’ve generally had search results that would give us comedy nights in Bristol alongside famous comedians born in Bristol.

Other ‘small’ words that have a big effect are also getting more attention. Nouns would sometimes be given more importance than a negative that changed the entire query. So, Google would take your plea for a quiet night out and do this: bars in Norwich with no live music, giving you the opposite of what you needed. BERT makes that vital distinction.

What to do about BERT

Search Engine Land reports that 10% of searches will be affected by this change. Which is huge: Google has refined the results for one in every 10 searches!

If you have ‘SEO content’ lingering on your website, it’s time to revisit that and put search engines to the back of your mind. If it pleases a human reader, it’ll please a search engine.

The good news is that your great content is now more likely to reach the humans that need and want it.

Your ‘keywords’ became ‘keyword phrases’, and those became ‘longtail keywords’. Now, you’re looking at incredibly individual sentences being what you rank for. So, it’s ever-more important to be creating content that’s specific and unique.