I recently wrote about using controversy to supercharge your video reach. One of the things I wrote about was how easy it was to be controversial in a damaging way and how hard it was to be controversial in a positive way.  Much harder than both is using comedy. Today we’re going to have a think about funny commercials that really made an impact. Then we’ll see what inspiration we can draw from them when making our own marketing videos.

Before tobacco advertising was banned Hamlet Cigars had one of the greatest campaigns ever devised. The premise was simple. Something terrible would happen to someone and they would smoke a Hamlet to make themselves feel better. The use of music was incredible important as was the repetition of the story. After years of producing these adverts people came to associate the air from suite number three by Bach almost exclusively with Hamlet Cigars. Just hearing the tune is still enough to make generations of people think of Hamlet Cigars. 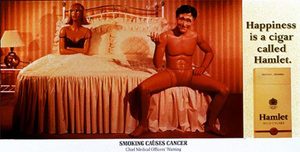 The comedy came from the silliness of the disaster befalling the protagonist in each of the adverts. In one famous example Columbus and his ship reach the end of the world and begin to fall off. While the crew panics, Columbus lights his cigar and the music begins and the voice over artist simply tells us that “Happiness is a cigar called Hamlet.”. In terms of the joke being told in these ads it is called a “pull back and reveal”. The viewer has no idea what the advert is for when they begin to view it, it is only when the disaster unfolds and the music begins that they realise.

The example below is one of the most famous Hamlet Cigars featuring the actor Gregor Fisher and his famous “Baldy Man” character.

The series of Old Spice adverts featuring the handsome man are based around a very old comedy technique that dates back to music hall and before. If you’ve ever heard any of Gilbert and Sullivan’s ‘patter’ songs you will recognise it. There is a fast rhythm to the speech. The speaker changes topic for comic effect and introduces the unexpected. This is going to be a recurring theme here. The unexpected is often a major element in getting people to laugh.

“Probably the best lager in the world”. You still remember the tagline. What’s interesting about this series of adverts is the transformation. The tagline then became “Carlsberg doesn’t do xxxxx but if we did, it would probably be the best xxxxxx in the world.”. The advert makers now have scope to be funny, and once again it’s all about the reveal, the unexpected.

So what rules can we take away from the adverts we’ve seen? How can we use them as a guide when we try to make funny marketing videos?

What all of the adverts we’ve watched have in common is the element of surprise. There’s the big reveal that let’s the customer know what they’re watching and is the punchline for the joke. Some of the adverts above rely on repetition of a catchphrase over time that can then be played on. We won’t have time for that so we need something that will get our viewers on the first watch. This means our tagline probably needs to be a pun of some kind. Don’t worry about suddenly being a comedy genius. Click here for a guide to creating puns.

All human beings are funny. We all make each other laugh. Trying too hard, however, is usually the route to failure. The Carlsberg Pub Team advert above wasn’t just funny. It was warm and endearing and gentle. It achieved this through a combination of warmth and honesty. We don’t expect people to be honest about themselves. When they are it is often shocking, and can often be funny. Think about what your product is and how it’s used. You will have funny stories from your business life. Perhaps things you wouldn’t normally share. Why not?

Be silly. Your comedy video doesn’t have to be clever to work. Sometimes out and out silliness can work wonders.

A final word on avoiding a cardinal sin. Don’t steal someone else’s joke. You will be found out. Do you remember when McDonald used the jokes from Viz magazine’s Top Tips section? Do you remember when the legal action and out of court settlement (which was donated to Comic Relief)?

Good luck with your videos and remember – be brave, be honest and be surprising.