If there’s one thing upon which we can all agree it’s that marketing is not meant to stop people becoming your customers. Advertising shouldn’t antagonise. I can think of examples that do. I never understood why they were ever approved until I started to think more deeply about the problem. I’m starting to see the pattern of corporate behaviour that created the issue and that has lead me to some conclusions. In this blog, therefore, I’d like to talk about some examples of adverts that antagonise. I’d then like to look at why they may have been created and finally how you can avoid that trap.

Adverts That Antagonise No.1

The first example I’d like to look at is so ubiquitous that you probably don’t even notice it any more. Next time you take money out of a cash machine take a look to see if there’s a sign saying ‘free to use’. There was a time when all cash machines were free to use. You just didn’t need signs like that. There are cash machines that charge for using them to take cash so these signs may seem like a useful notice. You couldn’t possibly be offended by them. But that’s not why they were originally added to cash machines.

A few years ago the banks decided that people needed to pay to access their cash through cash machines. Naturally there was public outrage and the banks abandoned the plans. To make sure everyone knew that the machines were free to use the signs were added. There were adverts on TV telling us that such and such a bank will never charge us to access our cash. People were not impressed. Everyone knows that banks work by investing the money people deposit in their accounts. By charging people for access to their own money they violated deeply held principles of fairness. People were then outraged that the banks would try and sell themselves as the good guys for not violating those principles.

Adverts That Antagonise No.2 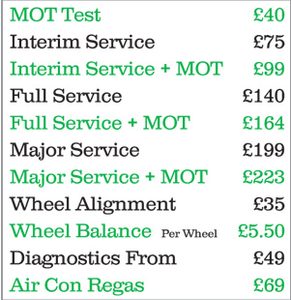 The other day I was driving along and found myself behind a bus. The back of buses is a traditional and valuable advertising space. The advert I saw was for a chain of garages. The large text read “Mini service and MOT only £199”. I was stuck behind the bus on a country road so I had the opportunity to look at the advert for quite a while. Then I thought about what is was telling me. In every garage I know, a mini service costs less than £100. A full service is around £150. An MOT costs £30-£40 so in what way is it worth advertising that the price your company charges for a product is 25% higher than everybody else. The more I thought about it the angrier I got. Why? I’ll tell you.

Why Do Companies Do This?

A while ago I wrote a blog about using video marketing to set customer expectations. I think there is a thought process in companies that inadvertently antagonises people that relates to that. I think it goes something like this.

I’m not saying that it’s impossible for a firm to achieve this. What I am saying is that it’s very easy for a company to insult their customers. When a company attempts something that is morally dubious you can see it. I can see it. When they try and persuade us that it’s acceptable we get a bit angry. When they try to persuade us that something is good value when it obviously isn’t we get angry at that too.

How Do We Avoid This?

The first thing for us all to remember is that as companies we are still members of society. If we violate the accepted norms of our society there will be a price to pay. In the examples I gave the banks wanted to behave badly (I want to use the word reprehensible here) but the garage chain were just being clumsy. There may be a very good reason why the garage charges so much. I don’t know what that is. What I know is the story in my head about the company attempting to get as much of my money as possible for as little effort as possible. Is that story true? I don’t know but I don’t have an alternative story to turn to. The advert on the bus couldn’t tell me a story, but a video could. Perhaps this video is a story about top quality care and service. Maybe it’s a story about using the best parts and being safe. A more in-depth look at the company may make me like them as people and make me willing to pay over the odds. The back of the bus can’t tell me any of that. I need something more.

Creating a paradigm shift in expectations is hard to do. We need to realise that a single image or sentence will not be valuable. We have to provide a new story for people to tell themselves to explain what has changed. Only in helping people to understand what we have changed will we be successful in changing expectations. We will then be able to avoid insulting people. As businesses we will not antagonise we will inform, and people like being informed.