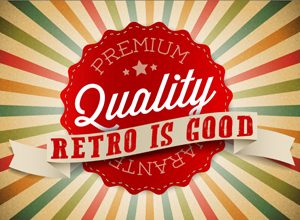 Why go retro? There are many reasons why a company may want to produce a marketing video with a retro feel. It may be all about style or about a cool look the business owner wants. It may be about a nostalgia that the business owner enjoys, BUT there is only one real reason to go retro. As with everything we do in our marketing videos, we are trying to engage our viewers emotionally so that they will want to make a purchase. There has to be a link in the viewers’ minds between their desire to purchase our product and the feeling they will enjoy when they watch our retro style video.

If you decide you want to have a retro style marketing video for your business you need to plan it through carefully with your producer. To help you I’m going to spend this blog and the next two, talking about areas that you will need to discuss. Hopefully I’ll be giving you some useful knowledge for those planning meetings.

What Do We Mean By Retro?

The first thing that probably springs to mind when we talk about retro styling is probably some undefined period of history between the 1950s and 1970s. Your viewers’ age range should be the guide when deciding upon the feel of your video.

Retro could mean anything from eliciting the look of 1920s silent comedy to the neon glow of 1980s pop videos. It could mean the glossy vistas of 1970s blockbuster movies. Or we could be thinking of the cartoonishly vibrant primary colours of the 1950s movie epics. It could also mean the editing techniques applied and the pacing of those cuts and transitions. Over my next two blogs I’ll look at editing, transitions and content but for today we’ll start with…

There is no more obvious identifier of the age of a piece of film or video than the aspect ratio. The aspect ratio of a video is simply the comparison of how wide the video is compared to how tall it is. Why should you care? You should care because aspect ratios have changed regularly throughout the history of film and TV. Those of you over the age of 18 will remember the big change in televisions we all undertook not long after the turn of the century. Big square televisions were out and everybody went widescreen. Why did we want widescreen TVs? We wanted them because our neighbours had them.

We all knew someone who had one. They were the fashion leaders, the early adopters. Most early adopters of widescreen televisions bought them because they were film buffs and movies had been widescreen for decades. Do you remember having to choose whether you bought the full screen VHS of that movie you liked or buy the widescreen version? Movie buffs all bought widescreen and accepted the letterbox format on the screen, but with widescreen TVs they didn’t have to. The question that arises from that is, why did movies go widescreen?

Nostalgia sells, so find out how a retro marketing video can work for you Click To Tweet

In the 1950s, American movie studios made the move to widescreen – and ultra widescreen – film formats. They did this to compete with the growing popularity of television which was emptying the cinemas. Movies were originally fairly square in aspect from their inception using a 4:3 ratio. There was a small change to what was know as “Academy Ratio” when talkies were invented to allow the sound to be added to the film strip. Academy ratio is 1.375:1 but it’s almost indistinguishable from 4:3 to the viewer. Televisions were first mass-manufactured in this ratio because it was the ratio to which audiences were accustomed.

When movie studios had to start distinguishing themselves as a form of entertainment they opted to go panoramic in their aspect ratio. They went widescreen because television could not. That meant movies that were 16:9, or 2.39:1 or even 2.76:1 for Ultra Panavision.

What Does This Mean For Us?

What this means for us is that if we are going retro with our marketing video we need to decide which period we are trying to reproduce or homage. Once we have decided upon the period we can then choose from the aspect ratios used in that time. The aspect ratio you choose will be the first indicator that your video is not the usual fayre that is presented. It is also vital in creating the emotional response we want from our viewers. Remember everything we do is to elicit the correct response. We go retro because we think it will work for certain customers. We spend the time and effort to recreate the retro look to enhance the feeling of nostalgia.

The sheer number of different ratios that proliferated during the 50s and 60s could make it difficult for us when trying to get a retro feel for our videos. It will help us to think about approximating the feel of each era. Here is a list of ratios and the decades for which they can be used.

I’ve cheated here to keep things simple. Aspect ratios are actually far more complicated than I’ve presented and more variable within each decade after the 1950s. The list is simply a guide that will make sure that what you make doesn’t look wrong for the decade you are trying to evoke.