Twitter is one of the leading social networking tools, with, according to about.twitter.com, 284 million monthly active Twitter users, with 500 million Tweets sent every day.

So how can you effectively connect with other Twitter users to promote your brand, products or services, aside from following them in the hope that they will follow back and sending @replies or direct messages?

One method is to use hashtags to participate in regular Twitter Networking Hours.

Let’s start by explaining what a hashtag actually is:

“a word or phrase preceded by a hash sign (#), used on social media sites such as Twitter to identify messages on a specific topic”

For example: #SmallBizSatUK is used to spread awareness of an initiative to encourage everyone to support local independent traders on a specific Saturday in December.

Most social media networks now have a hashtag search function.  It’s this search capability that underpins the use of hashtags for networking hours, as it enables Twitter users to connect and interact with each other across specific timeframes on agreed day(s) on a regular basis.

This business networking tool works particularly well for B2B (Business to Business) markets as the people who tend to participate are business owners. That said, ultimately we are all potential consumers too!

How to take part in a Twitter networking hour

Networking hours are generally industry specific, subject specific or location based.  Some just occur once a week, whilst others may have more than one day or time slot each week.

Start by selecting a suitable hour to take part in (see sample list below). On the allotted day and time, log into your Twitter account and enter the appropriate #hashtag into the search box to pull up some initial results to browse.  Here is a screen shot example showing some results for #SmallBizHour (which takes place on a Tuesday evening between 9pm & 10pm) 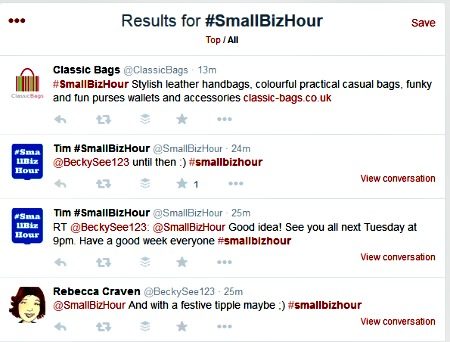 Some people choose to schedule a couple of early tweets as these hours can get rather fast paced.  It is important though to always be present at some stage during the networking hour to ensure you can respond to anyone who may interact with you.

If you are taking part for the first time, consider introducing yourself and your business, but remember, you only have 140 characters and must use the #networkinghour hashtag (replace networking with the relevant hour name) somewhere in your tweet – otherwise it won’t be seen.

By refreshing the search on a regular basis, you are able to see who else is taking part and strike up a conversation with them.  You can reply to something that you find interesting, or retweet a post  you feel your own follower base would also like to see. Think about what you would say to this person if you were face to face with them at a traditional networking event and keep the conversation going. This will help build a rapport with that person so they are more likely to follow you and interact with you in the future, which could include retweeting your posts to their follower base.

Make use of images, especially if your product or service is very visual. If you use the right image size (optimal size for the Twitter feed is 440px by 220px – work on a 2:1 height to width ratio), it can be eye catching, as the image will appear in full in the Twitterfeed.

I find it useful to create a list for each networking hour I take part in. That way I can add people I follow or interact with to it for future reference. It can help you remember where you first came across someone, or check to see if any of the people you follow during one of these hours follows you back.

There are too many Twitter networking hours to list, so instead I have focused on some of the more generic, UK regional ones and a few industry specific ones (please note that lower & upper case letters are disregarded during the search function).

Why not pick one of the ones in the list below and get started?  Don’t worry, they are not as daunting as they may seem – people tend to be very welcoming to newbies.