Home » Knowledge Centre » Should You Delete Your Social Media Account?
Get a quote
× 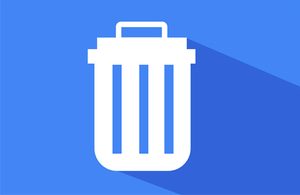 A few weeks ago, some bright spark in Hillary Clinton’s team brought about something great.

It was a tweet to Donald Trump that said “Delete your account.” in response to some typically nonsensical musing he’d published. 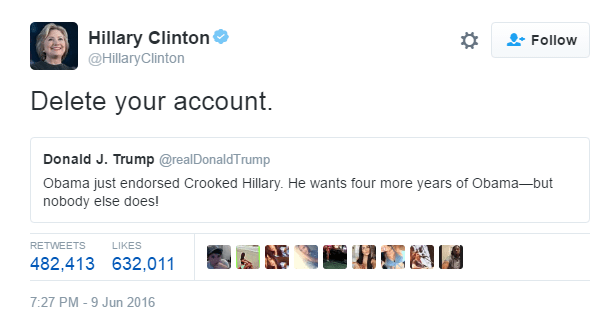 It wasn’t just a stone cold diss – it was a meme that had been doing the rounds on social since early 2015. (As a writer, I find the characteristic lack of punctuation thrillingly effective in this meme but sadly Hillary got it wrong.)

Whatever your feelings about politicians and popular culture and bandwagons, it was a pretty clever thing to do. The power of ‘Delete your account’ is that scrubbing yourself from the internet is seen as a drastic step in these modern times. Deleting your account – the proof you existed in the vastness of time – is a suicidal situation.

As a brand, the ramifications are different but huge. If you’ve been on social since we digital types started telling you it was no longer just a nice-to-have (like, 2010), you’d be giving up on nearly a decade of planning, posting, searching and listening. Likes, favourites, retweets, shares, hearts and comments. Company history, gone.

Two things to understand about social:

1. You are not Topshop

You do not have to use your social channels to be posting violently exciting stuff all the time. Brands that rely on selling young people a lifestyle (in spite of having no money) need social to stir up envy, longing and a feeling of belonging to a tribe.

Being there for your customers and potential customers is the most important thing. If you use content marketing (blogs, guide and so on), social is the obvious place to publicise those but if you’re not, you don’t have to force yourself to come up with juicy posts all the time.

If you let go of the idea of social as a source of traffic to your website – which only makes sense if you have lots of non-product content there – it becomes a much less stressful job. Just because ASOS and Coca-Cola are posting achingly cool, vibrant, exciting nonsense all the time doesn’t mean that’s what you have to do. Being helpful and welcoming is enough.

2. It doesn’t have to cost you money

It IS hard to gain a foothold on social without spending money, but if you’re there to answer questions and represent your company (rather than MAKE $$$$$), that’s free.

Not having a presence in the places people are searching for businesses is going to cost you in the long run. Staying there is not.

How to keep your social going if you feel like quitting

It’s a company thing, a community thing. Don’t feel you have to struggle along by yourself. As long as you have a clear guide to what is NOT ALLOWED, you should be able to ask for help.

Maybe one person in the team handles social each week. Maybe everyone has their own type of content that they put together and you post. Even just asking people to keep you updated on industry news and cool stuff going on in the business, that’s enough to keep your social easy.

Stop trying so hard! It’s OK for your social media to be a customer service tool and nothing more. Identify what you’ve been doing that actually works and adds value (one like on one how-to post a month is not evidence of value) and cut down to just doing that.

Having a plan makes social easy and less of a time suck. It could be as simple as ‘On Wednesdays we post a tip’ or ‘Every Friday we post an update on what the company’s been doing’. Getting rid of the time spent racking your brain for a cool idea will make social way less stressful.

Rather than leave social media for good, meaning you’re lowering your chances of reaching your customers but also being reached BY them, make a fresh start with less pressure. Stop judging yourself by other people’s profiles and stop setting yourself up for disappointment.