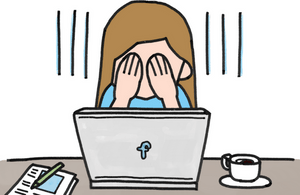 If I was being cynical, I’d translate Facebook’s latest statement as basically code for ‘We’re making it even harder for small businesses to get seen in people’s feeds. So… pay us more.’

Facebook announced yesterday (11 January 2018) that it will be prioritising ‘meaningful’ posts in feeds. Meaningful is, of course, completely subjective, so Facebook is sure to have a bespoke algorithm that dictates this. Posts from family and friends will also be prioritised over public posts.

“With this update, we will…prioritize posts that spark conversations and meaningful interactions between people. To do this, we will predict which posts you might want to interact with your friends about, and show these posts higher in feed. These are posts that inspire back-and-forth discussion in the comments and posts that you might want to share and react to – whether that’s a post from a friend seeking advice, a friend asking for recommendations for a trip, or a news article or video prompting lots of discussion.”

It’s a popularity contest! We already know that our little posts about the latest news in the world of ride-on lawn mowers can’t compete with a Buzzfeed video about dogs. Now, pfff. What can I say?

Facebook is about conversations. They want long debates in the comments and fewer ‘spammy’ posts on people’s feeds. That’s us, it seems.

“As we make these updates, Pages may see their reach, video watch time and referral traffic decrease. The impact will vary from Page to Page, driven by factors including the type of content they produce and how people interact with it. Pages making posts that people generally don’t react to or comment on could see the biggest decreases in distribution. Pages whose posts prompt conversations between friends will see less of an effect.”

This means pages with low engagement (where you’re maybe just posting because you feel like you’re supposed to) will have next to no chance of being seen. Pages that have quite a small audience but one that has conversations on their posts will, I assume, continue to do OK because ‘engagement’ is usually measured with percentages. This Facebook update will supposedly be predicting the potential of a post to spark conversation but that will likely be based on previous page engagement as well as topic, content source and so on.

That said, I think Facebook is going to be more interested in huge numbers. It’s good for the Facebook brand when things kick off, whether that’s a controversial viral video or a beautiful charity campaign – big numbers look good for them.

If you’ve been measuring your Facebook success by clicks to your website, it may be time to focus more on your engagement. I don’t see Facebook as the best direct response platform; you have to pay to get your ads seen, and your organic posts aren’t likely written to get a direct sale. Your page feed would look pretty desperate if they were all SELL SELL SELL.

“Local businesses connect with their communities by posting relevant updates and creating events. And news can help start conversations on important issues. Using “engagement-bait” to goad people into commenting on posts is not a meaningful interaction, and we will continue to demote these posts in News Feed.”

Use your Facebook time to talk to people. Post things (and a variety of things: video, lives, events, graphics, GIFs) that you know your audience will tag their friends in and discuss issues on. Get INVOLVED with those conversations. If you can get to a place where you feel like you have ‘regulars’ on social media, that’s what’s up.

Remember that social media is about talking, not selling. Make people like you.

If you fancy an exercise in reading between the lines, take a look at Facebook’s statement.