More and more businesses have discovered the power of Facebook advertising in recent years. The social networking giant has become an integral part of life for many people in the UK. And that’s before you add the additional reach and growth of Facebook-owned Instagram.

But it’s not just the scale of Facebook advertising that makes it useful. It’s the combination of size with the ability to use a wide variety of types of advert, and the massive amount of user data available for targetting.

Whether you’re running your own company or justifying social media advertising to your boss, it’s worth taking a look at the latest information on Facebook’s size and influence. And how the internet has taken hold of the UK.

If that isn’t enough, Facebook has also launched Facebook Audience Network (FAN), which allows you to use the same mechanisms for promoting your business on mobile apps outside the social network itself. That can offer an additional reach of more than one billion app users from eligible publishers. Facebook advertising also helps to track users across different devices, and use location targeting for mobiles to attract people within the right area for your company.

That means it’s not just for global corporations, but it works really well for new and small businesses who need to make their budget really work.

Assuming you want to benefit from promoting your company to such a large potential group of customers, there are different options to allow you to achieve your goals.

Social Proof / Brand Awareness: It’s expected that any reputable company will have a Facebook page which you can easily find. Yet many companies haven’t optimised their page, published regular updates, or bothered to promote it. So when you see a company has just a handful of people liking and following their page, it undermines the trust you might have given them. Whereas a popular page, which may have already been supported by someone in your Facebook network of friends, will reassure you that they’re worth doing business with. That’s why it’s worth investing in promoting your page, to at least build your following into three or four figures. It’s relatively cost effective, and by targetting people likely to be interested in your business, at least a percentage of them can also turn into customers, giving you a direct financial return on your investment as well.

Boosting Your Content: People will follow a particular page for all kinds of personal reasons. But many will say it’s to receive discounts and promotions, get access to exclusives, or find out about new products. As the organic, unpaid reach of Facebook Pages has been lowered, spending a little of your budget to promote competitions, exclusive offers and the latest product news can make a big difference. And that content is perfect for driving more interaction with your business, and increasing sales.

Remarketing: If a customer has left products in their shopping basket on your website, or been distracted from filling in the enquiry form, then remarketing can bring them back. By targetting lapsed customers on Facebook, you can stay in their mind, and prompt them to return – especially if you can offer something extra as an incentive.

Lead Generation: The contact and sign-up forms on any website will see some people dropping out of the process before completion. And it’s often due to the hassle of typing in all your details, particularly on a mobile screen. But you still need customer details, so the Facebook Lead Generation adverts are particularly useful, as potential customers can share their details without leaving the social network. And as Facebook wants to encourage people to stay within it, Lead Generation adverts often get a higher reach, better conversion rates, and the cost can be much lower than promoting a page on your website to capture details.

The Right People at the Right Time:  Search advertising works well for people who know to look for a particular product or service. But Facebook Advertising allows you to target people who might not even know they need you yet – but at the most appropriate time or location. The demographic information includes being able to advertise to the recently engaged or newlyweds, those who have just moved house, changed jobs, or a wide range of other options.

By combining several different factors, you can target the perfect Custom Audience for your business. And limit the range so your local services aren’t being offered to someone living in the other end of the country – but appear when they move to your area. 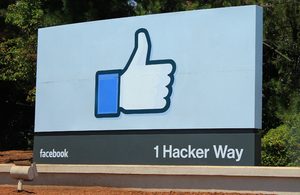 As Facebook captures the attention of more than half of the UK population, it’s an advertising and promotional opportunity that your business really can’t ignore. Although the options may vary for your individual goals, the ability to reach the right customers from a potential pool of 33.2 million people is one that shouldn’t miss out on.

Having the right approach and content will make the biggest difference to your success. Helpfully, Facebook has collected hundreds of examples of small business case studies to provide you with inspiration, whether you’re building a brand, selling event tickets, growing an online store or providing services.