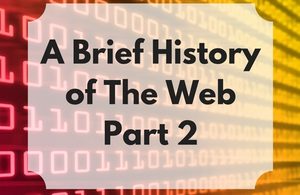 Welcome back to part 2 of our concise history of the web. If you missed part 1, click here to get up to speed. We spoke about the web’s humble beginnings at CERN, as the brainchild of Tim Berners-Lee; and how this brand new way of using the internet exploded almost overnight.

We last left off our story at the end of 1993, when the use of websites as we know them today started to skyrocket. The Internet and the very earliest websites had mainly been the domain of academia and scientific organisations; but with technology becoming more affordable and the announcement that the web protocols developed at CERN would be free to use forever, the web grew exponentially.

New sites cropped up all over the world each week, and about a vast array of topics too. Online file sharing and communications protocols had been around for a while, so people had been able to discuss and share ideas before; but it was only now that people were able to provide information and communicate on a visual platform that shared the same protocols and technology worldwide. A platform that was absolutely free to use (internet service provider charges are something different). It was nothing short of a technological revolution.

But following every revolution, comes a period of adjustment in order to prop up its ideals and carry them into the future. Inventor of the web, Tim Berners-Lee, has always been focused on keeping the web an open space; decentralised, free of an agenda, allowing complete freedom of expression, and totally without any royalties or tolls to use. When a growing space like the web has such specific principles in mind, you need a way to keep those principles in check.

After leaving CERN in 1994, Berners-Lee started the World Wide Web Consortium (abbreviated to W3C) which served to uphold the web to these principles, and to keep things as compatible and accessible as possible for the good of all of the web’s users. W3C is still very much alive in 2016, and helps to uphold these standards to this day. You can read more about the wide ranging set of the organisation’s standards on their website.

The web continued to grow throughout the 90s, as more and more homes and businesses became connected due to dropping prices of computers and prices associated with connecting to the internet. This was well and truly the era of those “free internet for 30 days” CDs from internet service providers (the ones which left modem-less people scratching their heads wondering how that works). An era of free Geocities, Tripod and Angelfire websites that could be set up with very little technical or design knowhow, and more frames than you can shake a rollerball mouse at. Of blisteringly fast 56k data transmission speeds. Of AIM and MSN chat rooms, poorly made GIFs and default blue hyperlinks. Those halcyon days when this was the official website for a big-budget movie and nobody batted an eyelid. Days of flash animations – and all of the technical hiccups that went along with them. Back when the internet wasn’t always connected and you had to dial up each time – this sound was music to your ears.

Ah, mid-to-late 90s internet, you’ll always have a special place in my heart.

One upshot of the web exploding is of course that businesses had to get in on the action too, not just your average home user. Having a web presence became more and more essential to business as time went on. Many were merely there to publish marketing materials on a global platform at a low cost; but as technology developed it became possible to transmit secure, encrypted data via HTTPS. This is a secure version of the hypertext transfer protocol developed by Tim Berners-Lee, adapted for security by Netscape communications in 1994. With the security to safely transmit payment data over the web, the world of e-commerce was born. US/global versions of online shopping behemoths Amazon and eBay were launched in 1995, but we in the UK would have to wait until 1998 and 1999 respectively for our own versions of those sites.

But you can’t talk about business online in the late 90s without talking about the dot com boom and eventual bust. In very general terms, with low interest rates and a brand new online platform at their disposal, lots of enterprising types excitedly set up new companies to capitalise on it. Whether it was hubris, technical naivete, or just a desire to be ahead of the rest, many of these companies were ultimately unable to turn a profit. Though some were very successful and even continue to this day, many failed due to being blinded by the novelty of it all, or weren’t realistic about their plans. One term popularised at the time of the boom referred to “irrational exuberance.” Soberingly apt methinks.

It’s time to end this chapter, but the story doesn’t end with doom and gloom! Come back for the next instalment where we’ll discuss the early 2000s and the beginnings of social media, content marketing and media streaming; you know, all that fun stuff that makes the modern web what it is.

Part 2 of our concise history of the web, covering its explosion in the 1990s Click To Tweet

Do you remember this chapter of web history? Were you in business at the time that the web exploded? How did it impact you or your employer? Did you see any success from the dot com boom – or indeed fallout from the dot com bust? Or were you too young to know what was going on? What are your memories of this era of the web? Let’s reminisce down in the comments!