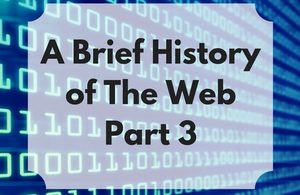 By the way, if you missed parts 1 and 2 of our history of the web, you can check them out here: Part 1 and Part 2.

Welcome back to Part 3 of our brief history of the web. We last left off around the time of the millennium and the aftermath of the dot com bust.

The early 2000s saw blogging enter the mainstream. It owes its popularity to sites like Blogger and LiveJournal that had already been around since the late 90s, but the idea took a couple of years to take root. Around the same time, the first social media networks started to appear. Friendster (now defunct) launched in 2002, followed by MySpace and LinkedIn in 2003. These platforms allowed direct communication in ways that the web – and indeed the internet – had never seen before. LinkedIn remains an important professional communication and networking tool to this day. The progress towards social media as we know it really starts to take shape in 2006 when Twitter went live and Facebook was made available to the general public (previously it had just been for university students).

If you’re wondering what inventor of the web Tim Berners-Lee was up to during this time, his work supporting and standardising the web with the World Wide Web Consortium continued, and he was knighted in 2004.

Google was also very busy in the early 2000s, launching various platforms such as Gmail, Google Maps, Google News and Google Books. Increased internet speeds allowed for fast transmission of audio and video data, making video streaming possible. YouTube was launched in 2005, and was acquired by Google the next year.

In the mid to late 2000s, cloud computing and online “SaaS” software (Software as a Service) starts to become more prevalent. The internet crept further into our lives, with businesses like cafes and restaurants starting to provide free WiFi to their customers. Due to the increased access to media and the means to share it socially, viral crazes and joke “memes” started to gain recognition.

Nearing the end of the decade, web-enabled smartphones start to take centre stage in people’s lives, with Instagram and Pinterest joining the social media sphere in 2010. With easily accessible internet in many places and decent cameras included with most phones, sharing your own pictures and video over social media saw a meteoric rise in the years that followed. Social media, smartphones and their use online became so ubiquitous that the word “selfie” was added to the Oxford English Dictionary in 2013.

Social media and smartphone users rose in number over the next few years, and the web became more and more enmeshed into our daily lives. But in 2013, a revelation was made about the security of our data; with the help of the Guardian, former NSA employee Edward Snowden revealed the sheer extent of surveillance that is carried out on normal people by governmental agencies, which left dumbfounded web users looking over their shoulders at every turn. Sir Tim Berners-Lee spoke of increasing surveillance and censorship of the web in 2014 is this WIRED article:

“We risk losing all that we have gained from the web so far and all the great advances still to come. The future of the web depends on ordinary people taking responsibility for this extraordinary resource and challenging those who seek to manipulate the web against the public good.”

As technology has got faster and more portable, it has become more and more ingrained in our lives. The past couple of years online have all been about growing on what has come before, and doing it faster, bigger and better. One way in which the web and the internet as a whole is changing is the move towards the “internet of things,” wherein everyday appliances have internet connectivity, like example smart meters/thermostats and stock-managing online refrigerators.

Which brings us to the present day, where many people keep their phones by their bedside, with many checking email and social media before they go to sleep and doing the same as soon as they wake up. Where we cast YouTube and Netflix to our TVs wirelessly and with little chance of slowness or buffering. Where paper-based party invitations are pretty much a thing of the past and get-togethers are arranged over social media.

What Have we Learned?

But where does all of this leave your average user today? What does it mean for small business people? There are many lessons that the story of the web can teach us, as well as reflection on where it places small businesses on the global platform today:

Check out the final part of our history of the web, and what it has taught us over the years... Click To Tweet

What is your favourite feature of the modern web? What particular part of modern technology boggles your mind to think about? Let’s have a natter down in the comments!