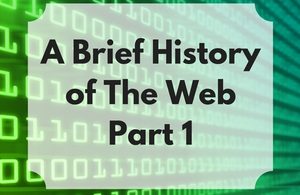 Nowadays it’s hard to imagine a life without websites as we now know them today. The web is such a ubiquitous part of our everyday lives that we almost forget the hard work that went into creating it. It’s a fabulous, open platform for people to get together, collaborate and share ideas. The birth of the web and how it has developed since its inception is an interesting tale – so sit back and check out our first instalment of a Brief History of the Web…

Before we begin, we need to establish the difference between the terms “The Internet” and “The World Wide Web.” The Internet is the interconnected network of networks, servers and PCs over which many different types of files can be shared in a number of different ways. The World Wide Web (generally shortened to “the web”) is just one of these different ways, and comprises what we generally call “websites.”

There are a number of different ways of sharing information over the Internet. Consider things like email, peer-to-peer file sharing and VOIP telephony; so websites aren’t the only data that moves around on the Internet.

The “www.” that you see at the start of some website addresses (known as “URLs” – Uniform Resource Locators) stands for “World Wide Web,” but that doesn’t mean that URLs without a “www.” are not part of the Web. The key part of a website’s URL is the “http://” which refers to the manner in which all websites are accessed and transmitted, utilising the “Hypertext Transfer Protocol.”

Now we’ve established the place of websites within the greater concept that is the Internet, let’s get on with the history lesson.

Once Upon a Time…

We have had the interconnected network that is “the Internet” for far longer than we’ve had websites. The concept of computers connecting to other computers at different physical locations via networks came to life in the 60s, chiefly for military and research purposes. However, these networks were still self-contained and totally separate from each other. The networks and the ways in which people used them grew and developed throughout the 70s and 80s, and as a result, we saw a shift towards these networks clustering and interconnecting together to become a worldwide network that became the early Internet.

Enter Mr (now Sir) Tim Berners-Lee; a British computer scientist and the son of two early computer scientists. He graduated with a first class degree in physics from Oxford in 1976, and after a couple of specialist IT based jobs, he worked as an independent contractor at CERN in Switzerland (the place that’s now home to the Large Hadron Collider). During his 6 month stint at the esteemed research site, he had the opportunity to work on a prototype system called ENQUIRE which laid some of the groundwork for what would later become the web. Once his contract was over, he returned to the UK to work at an IT company based in Dorset.

Berners-Lee returned to CERN in the mid-80s, and was presented with a very unique problem. Scientists and researchers from all around the world needed a way to pool ideas and resources, but there was no set, uniform way in which to share and present their data over the Internet. He set to work, and in 1989 he put together a proposal titled “Information Management: A Proposal,” which married the concepts of linked hypertext and the pre-existing Internet. Though the proposal was met with an underwhelming response, Tim was permitted to start work on it in late 1990.

The Web is Born

By the end of 1990, Berners-Lee had put together the basic components required for what we now know as the world wide web. HTML (which is indicated by “.html” at the end of webpage URLs on some websites), URL technology and HTTP were all ready to be rolled out. Tim also constructed the first web browser and editor so people could view and edit web content. Shortly after, the first webpage was unleashed on to the open Internet (which has since been lovingly restored by CERN); and in 1991, those outside of CERN with the resources to do so were welcomed to follow suit.

As this new online platform took off, Berners-Lee decided with CERN to keep the code and methods involved in using the World Wide Web absolutely free for people to use, without royalties, forever. He said:

“Had the technology been proprietary, and in my total control, it would probably not have taken off. You can’t propose that something be a universal space and at the same time keep control of it.”

This decision was formalised in 1993, and the code was available to whoever wanted it. The web absolutely exploded: In January 1993, there were 50 web servers (computers that store website data) worldwide, but by October there were over 500. Those who had a presence on the web before ‘93 were chiefly scientific or academic institutions, but now the web was starting to be used for things with a wider interest such as the arts, maps, music and even jokes and comics.

Join us next time when we’ll be discussing the uprising of the web and how it started to be used for business. But what comes up must come down – we’ll touch upon the dot com boom and bust. Be sure to not miss it.

Check out Part 1 of this concise history of the web as we know it today. Click To Tweet

I’m curious if anyone reading this remembers the pre-website days of the Internet; do you? What was it like? If it’s before your time, what was your first interaction with the web? What was the first memorable website you frequented regularly, whether for business or pleasure? Let’s compare notes down in the comments…