Home » Knowledge Centre » Can You Really Buy Social Media Followers? (And Should You?)
Get a quote
×

Having a large number of followers on social media is supposedly testament to two things: your success as a business, and your level of investment in customer communication. So it’s no wonder that growing follower numbers is a major social media marketing focus for many businesses.

As with any marketing tactic, there are white hat approaches to growing your social media following, and black hat approaches. One such black hat trick is to buy followers. There is a huge market for purchasing followers, and a result there are a huge number of fake accounts set up purely to bulk up real accounts’ follower numbers.

But how does this work?

How to buy social media followers – and how it works

Building a following organically by delivering a steady stream of high quality content takes time, and small-to-medium businesses (especially new ones) may feel the pressure to grow their followings fast. Anybody seeking an immediate boost in followers can do so by paying for them. There are various companies from whom you can purchase new followers, and after paying them the fee you’ll see the number of accounts following you start to increase rapidly. The problem is that these followers that you’ve purchased aren’t real humans; they’re more than likely spambots – or fake accounts – that the company has created or sourced for the sole purpose of selling on to desperate businesses and individuals seeking more followers at any cost.

It isn’t just businesses that purchase social media followers – the pressure is on around the world to look popular, and there are plenty of people and organisations who don’t care about the quality of their audience. Social media influencers, who can earn thousands of pounds from their posts, have a vested interest in continually growing their follower numbers amidst fierce competition from other influencers. Vloggers, celebrities, even politicians have been known to purchase followers to bolster their figures. However quantity isn’t always king and there are real pitfalls of purchasing followers, as anyone who’s been ‘followed’ organically by a fake account will also be able to attest.

What’s so bad about fake followers?

Fake accounts are everywhere – search your Twitter and Instagram follower lists and you’ll probably find a few even if you haven’t bought followers. They stand out a mile – firstly their profile pictures are usually photos of objects rather than people, and their bios (if they have one) are short and often nonsensical. Then a quick scroll through their timeline will usually show very few posts, and almost no engagement with other accounts. They’ll follow perhaps one other account if that.

Fake accounts don’t engage with your posts, so they bring your overall engagement rate down. If you regularly put money behind social media ads then that money is wasted on all the fake accounts that the ads reach. And if your ‘true’ followers scan your list of followers and see lots of fake accounts? It decreases your credibility in their eyes.

Fake accounts are seen as a pest by many true influencers because they damage credibility and weaken overall engagement – take a look at the bio of this frustrated creative: 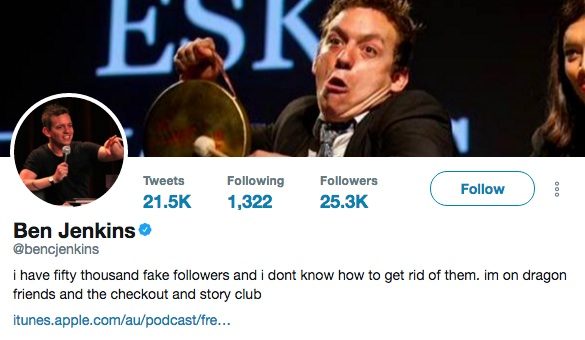 So should you buy social media followers?

If you want a quality, targeted audience and a trustworthy reputation – no. It isn’t worth increasing your following if it lowers your engagement and credibility.

After The Elle Darby Furore, Have Social Media Influencers Had Their Day?