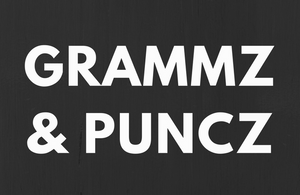 We all need a bit of grammar and punctuation.

In a small business, you often end up writing even if you’re not a writer. It doesn’t matter how many times you mutter at the bin, “I’m not a writer, though” – someone’s got to do it.

Good accuracy in writing can mean the difference between a customer trusting you and thinking you look dodgy.

The terms involved with grammar and punctuation don’t matter; you just need to be able to look out for the mistakes they refer to. Then you can look it up.

Grammar everyone needs to know

The important thing to remember with nouns is that they have to agree in number throughout a sentence.

20,000 frogs went swimming; they ate a lollipop between them and then swam away.

‘Frogs’ is a plural noun and ‘they’ is the third person plural pronoun that agrees.

Pronouns are how you refer to people without their actual name.

Verb tense is important because it keeps the reader with you in time:

Two years ago, I went to Spain. I ate chorizo and drank too much wine.

One frog does a thing; two frogs do a thing.

Adjectives describe nouns. They can come before the noun or after the noun.

The pretty cat.
The cat is pretty.

Try not to overuse adverbs. A plague of adverbs is the mark of poor writing.

The passive voice usually distances the writer from the action. For that reason, it’s seen as quite corporate. Keep an eye out for it.

These happen when the reader can’t tell who the extra detail of a sentence (modifier) refers to.

A dangling participle is the same kind of thing:

Walking down the road, a deer jumped out at me.

In this scenario, the reader’s brain assumes the deer is walking down the road when actually you meant:

As I was walking down the road, a deer jumped out at me.

These are the kind of mistakes you don’t notice in your own writing – that’s why getting someone else involved is a good idea!

Directive or imperative language commands people to do things and is particularly useful in marketing copy, where you’re trying to get someone from website visit to sale.

Get a quote now
Order your copy

So, if you’re feeling the pinch right now, how about a cheeky quote to see how much you could save?

BUT that relies on people reading and processing it. Much better to give them short, sharp and directive to get them from a to b quickly.

Punctuation everyone needs to know

Commas are usually used instead of the words ‘and’ or ‘or’ to make a more elegant sentence.

You only need the one comma there because you have a list of three one-word items – it’s simple to understand.

This shows that the last two words are a pair, not separate list items. In American English, the last item of a list usually has a comma before it anyway. Which is just plain silly.

The joining comma connects two separate sentences but also needs a connecting word. These are words like and, or, but, while, yet.

I’ve given forty years of my life to this company, yet here I am with no pension.
I spent yesterday writing angry emails and pacing the floor, but I also had a very nice burger.

I think of these as connecting two separate feelings or concepts.

I sat on the sofa, comfy at last, and positioned my hot water bottle just so.

If you deleted the bit in between the bracketing commas, the sentence would still work.

There are three reasons to buy a kite: to have fun, to get more exercise and to annoy people.

It can also introduce an explanation.

Black box insurance is an excellent way for young drivers to save money: it’s cheaper and it prevents crashes.

The two phrases either side of the colon are complete but the second explains the first.

We made a lot of mistakes; it lost us the game.

En dashes can be used to separate a final, strong point for emphasis.

At the end of the day, lives are being saved – and that’s what matters.

They can also be used to bracket additional information in a sentence.

The teddy bears – disgusting though they were – had been lined up like coconuts at a fair.

We use brackets to give an explanation, for example, to introduce an initialism:

Best practice is to introduce the full name on first use, then use the initialism throughout.

We also use brackets to denote a thought or cheeky aside:

The prime minister today said, “Children should be eaten by this party because they’re delicious.”

If you want to miss out bits of quoted speech, you need ellipsis:

If something is wrong or colloquial and you want to make sure the reader knows you didn’t make the mistake, use [sic]. This is short for the Latin sic erat scriptum – thus was it written.

The prime minister said, “Children should be eat [sic].”

Inverted commas show a thought that is representative of what people are saying. We’re all used to seeing this in tabloid headlines.

The palace reports ‘royals at war’

They can also introduce a thought you don’t agree with or want to distance yourself from.

So-called ‘boy racers’ still trouble insurers despite most telematics data proving them to be largely mythical.

Apostrophes can show possession: something belonging to something else.

That table is theirs and that’s the end of it.
Whose is this pair of pants?

For every pronoun (how you refer to people without their names, remember?), there’s a possessive version.

Mine
Yours
His/hers/its
Theirs
Whose

So, that’s your Year 4 English revision done. It really doesn’t matter if you don’t remember grammar and punctuation rules, as long as you recognise when something looks a bit funny. Just look it up!

I passionately recommend the Dictionary of English Grammar and the Penguin Guide to Punctuation, both by R.L. Trask. Legend.