Home » Knowledge Centre » Business Advice » Will The Changes To The Cheque Clearing System Affect Your Business?
Get a quote
× 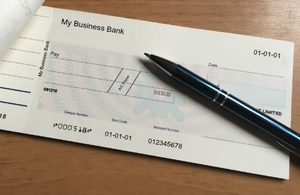 For many years there have been complaints that the bank cheque clearing system is antiquated. With electronic transfer readily available to business owners, there have been calls for the phasing out of the cheque book.

Payment by cheque has been declining for a while, partly due to the changes to bank cards a number of years ago. You may recall that bank cheque guarantee cards were withdrawn so they no longer guaranteed payment, limited to the value on the supporting card. Following this, it was expected that cheques would simply disappear.

I used to work for a major high street bank in the 1980’s/1990’s. Back then we received the cheques from the clearing house and had to physically inspect each cheque to ensure the words and figures were correct, the cheque was dated and there was a signature. This was labour intensive, albeit undertaken by junior staff. In my latter years with the bank, the process was amended so that physical checks were only carried out on high value cheques.

Back then, it was standard practice that customers were told a cheque clears within three days. Over the years this has moved and some banks quote six days.

So why such a difference?

Sadly, when cheques cannot be honoured due to insufficient funds in the account, the system for returning the cheque to the paying in bank relies on the postal system. The cheque would then be represented and hopefully second time around, the funds would be available to pay it. Otherwise, it would be returned for a second time for representation. A third failure would mean the cheque is returned to the payee and their account debited. They would then have to contact the issuer to arrange payment by an alternative method.

For a supposedly sophisticated system, the reliance on the postal service was costing too much. The more unreliable the postal service became, the risk of bad debt increased, which is possibly why banks began extending the clearance timeframe cycle to their customers.

What Are The Cheque Clearing System Changes?

The new changes will be phased in from October 2017 and it will take until mid 2018 before all banks and building societies are using the new system.

Under the new regulations, co-ordinated by the Cheque and Credit Clearing Company, banks will be able to clear cheques by sending pictures of them instead of the paying bank having to have the physical cheque in their hands.

Rather than wait six days for a cheque to clear, it will clear in one day! It’s unclear however, how the banks are going to combat fraud and what will happen to the actual cheque. I suspect the physical cheque will be retained somewhere. No doubt further information will be released in due course.

Will The Changes To The Cheque Clearing System Later This Year Affect Your Business? Click To Tweet

Some banks have been trialing the new system for a while. Whilst I haven’t seen any feedback on the paying in of an image, the physical cheque was required to support the image. This may not happen in the future and it may be incumbent on the payee retaining the cheque in case of fraud. This places more demands on establishing clean systems for the acceptance, paying in and safe storage of these physical cheques on the basis that fraud will continue and the evidence will be required at some stage.

What Will This Mean To Your Business?

If you are a business that issues cheques, and due to cash flow reasons, relies on the current clearing system to provide additional time to pay them, then times are going to get a little harder. Conversely if you are paying cheques in from your customers, your cashflow may improve as they will be cleared faster.

So if you happen to be a business using the old system to your advantage, you are going to have to place greater importance on cash flow management.

With electronic banking becoming easier, it’s only a matter of time before the cheque clearing system is deemed too expensive to maintain. With less than 500 million cheques processed each year, there is more than a raised eyebrow as to why the system hasn’t already been scrapped.  Perhaps this is one of the last paper systems to remain in place to cater for the older generation. The tech-friendly younger generation rarely use cheques and most probably don’t even own a cheque book.

At the moment details of the new cheque clearing scheme are still a bit sparse. No doubt your bank will be contacting you in due course to explain the changes in more detail. At this point, if your business still relies on the receipt and issue of cheques, then you need to be thinking about the new measures required to maintain high levels of security, control of your paper records to combat potential fraud, and manage your cashflow.