Home » Knowledge Centre » Is Google Going Longform With New SERPs?
Get a quote
× 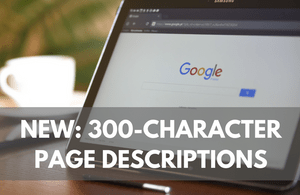 The SEO expert is now recommending character limits of 300 for your meta descriptions. It’s been 160-ish for YEARS, so clearly they think something pretty big is going on there.

Why Moz is recommending doubling your meta descriptions

At the beginning of December, Moz discussed an investigation into SERPs in its Whiteboard Friday video. Before the middle of November, more than 90% of search snippets were 165 characters or fewer. After that, 51% of results had page descriptions far exceeding the previous character limit. It’s possible that for some, Google was pulling through old 160-character descriptions – so this number would have been even higher if pages were optimised for the new format.

What it means for you

Longer search result items mean fewer items per page, so if you’re appearing lower down right now, it’s probably going to get worse. It’s also less likely that people will reach the lower items as it will be further to scroll.

Click through rate is also fairly likely to drop a bit as longer snippets mean more information can be gleaned right there in the SERP, without a user needing to go any further. I think this seems to be the goal; Google is getting better and better at clipping the most important information from our sites to display in SERPs. That said, you definitely should be adapting and writing longer meta descriptions, even if Google mostly ignores them and makes its own. ¯\_(ツ)_/¯

Fan fiction: is Google hitting our paranoia about #fakenews with the idea that more words = more convincing? We’re now so used to badly made pieces of faux fact on the interwebz that perhaps we crave the well-crafted longform of days past – days when people, like, fact-checked?

In some of the biggest social media news last year, tweets grew longer. They doubled in length from 140 to 280 characters and I have to say, I’ve seen a lot of creativity flourishing because of it. I thought the excitement would die down because threads were so popular but no – threads have just got better!

A narrative thread, often introduced as just that (“Thread:”), is one of the most popular formats on Twitter right now. It even makes its way over to Instagram, where threads are posted from Twitter as multi-frame screenshots. What is happening?

I think it’s all about 2017. Last year was – in my own consciousness, anyway – a MASSIVE year for social, political and cultural commentary. #Wokeness (being aware of global issues) is so popular, it’s a meme. With the New Yorker exposé of Harvey Weinstein, the #metoo phenomenon, endless breaking news about the White House and the even more endless fallout from the EU referendum, I think we’re all desperate for a calm, smart person to explain the world to us.

So, let’s make 2018 the year of longform. Get your thinking caps on, gather your facts and gird your loins: put some sense out into this confusing world.