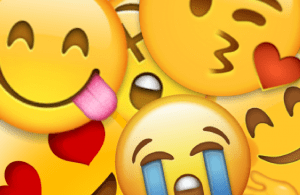 We humans are pretty good at linguistic ambiguity. We’ve been mastering the art of communication through words since the day we were born – it’s our life’s work.

Emojis, however, are a bit of a plot twist. It’s been hundreds of years since the common man had to rely so heavily on pictures to interpret meaning, and it kind of came back out of the blue.

We’re now navigating a whole new facet of language, most of us many years after we thought we’d got it down. Of course, it’s very tempting to jump on board and starting firing out these fun new emojis all willy-nilly – but halt! It’s a bloomin’ MINEFIELD.

Three emoji pitfalls to look out for

It should come as no surprise that this ‘international language’ is used in very different ways around the world. Facial expressions and gestures can have surprising variations in meaning between cultures. Same for emojis.

Emojis – and this is another non-surprise – were a Japanese invention, an evolution from the old school emoticons that peppered chat rooms in the 90s. Probably for this reason, many emojis are based on manga and anime. This style of drawing includes lots of emotional clues that your average Westerner is not going to be too aware of.

For example, the emoji you might use as a signal that you’re pretty upset about something –

– is actually based on the face an anime character might have when they’re sleepy. What you think is a tear is actually…well, it’s snot. I can’t tell you WHY that’s a sleepy signal but it is. Sorry!

What emojis mean in different countries:

If you know a bit about body language and gestures in different cultures, these won’t come as a surprise to you. Except maybe the poop emoji. That’s an interesting one.

See? Not such a casual little throw-away after all.

Ambiguity is the spice of communication – and the trap door. Just as words have different connotations across cultures, genders and age groups, so do emojis. Something as oft-used as what I call the cry-laugh emoji

could mean tears of hysterical laughter or tears of joy, depending on who you are. Not good if you’re reacting to someone’s emotional birth announcement.

Younger audiences, in particular, may interpret emojis differently. If you’re texting your 15-year-old daughter, you may inadvertently cause hilarity by sending an emoji with an in-joke attached to it – one you have NO business knowing anything about.

Slang (and yes, emojis are a massive part of slang) moves FAST. If you happen to be over the age of about 18, you have next to no hope of keeping up with it enough to use emojis to look cool. But you CAN stay aware enough to avoid using something truly humiliating in your marketing. Talking to your kids is a good start, and Instagram’s discover feature is pretty much my bible for popular culture. Whether I like it or not.

Emojis you need to avoid right off the bat:

It’s pretty darn obvious once you see it.

Apple removed the gun emoji from its repertoire in 2016 after a campaign called #DisarmtheiPhone by New Yorkers Against Gun Violence. Hilariously, they replaced it with a water pistol, which doesn’t have quite the same threat to it. Other operating systems including Android, Google and Microsoft followed suit a few years later. But be mindful – even if you really mean ‘water pistol’, for some people the connotation will still be a gun.

Another thing to be aware of is the continual release of new emojis. When they first became popular, emojis didn’t feature much diversity. Now, the options for ethnicity, orientation, faith and so on are huge – so if you DON’T use them, what’s that saying about you?

Key take-away: know your emoji history. There’s even a site for that.