It seems like every other week the ‘landscape of SEO’ is experiencing a dramatic overhaul. Whether it’s the celestial dawning of a new Apple product that promises to jumpstart the smartwatch market, or a mobile announcement from Google that seems to herald the end of civilisation, there’s always something for content marketers to huddle around a table and discuss.

The next big thing to hit drawing boards in digital marketing offices everywhere will be voice search, along with Google’s newfound emphasis on what we’ll call ‘direct answers’. Those who’ve chosen to follow the ebb and flow of the Google machine and practice SEO for a living are now facing a future in which search queries will come via voice recognition technology rather than tangible text.

You’d be forgiven for thinking that isn’t going to be too much of a problem.

After all, for voice recognition technology to work the words have to be ‘recorded’ in some way, and the results presented based on search terms as usual – so everything should carry on as normal, right?

The real game changer here isn’t going to be voice recognition itself, but rather the way search engines respond to it. Google already have ‘direct answers’ in response to voice searches, also known as ‘rich’ answers or snippets, and they’re already becoming ubiquitous even in text based searches. For example, if you are uninhibited enough to talk to your phone in public, you might ask, “OK Google, what are the time zones in the US?” You’ll be presented with a rich snippet at the top of the results page that tells you everything you need to know. Go on, try it. If you don’t want to talk to your phone, just type it into the search bar and it’ll yield the same result, even on desktop. 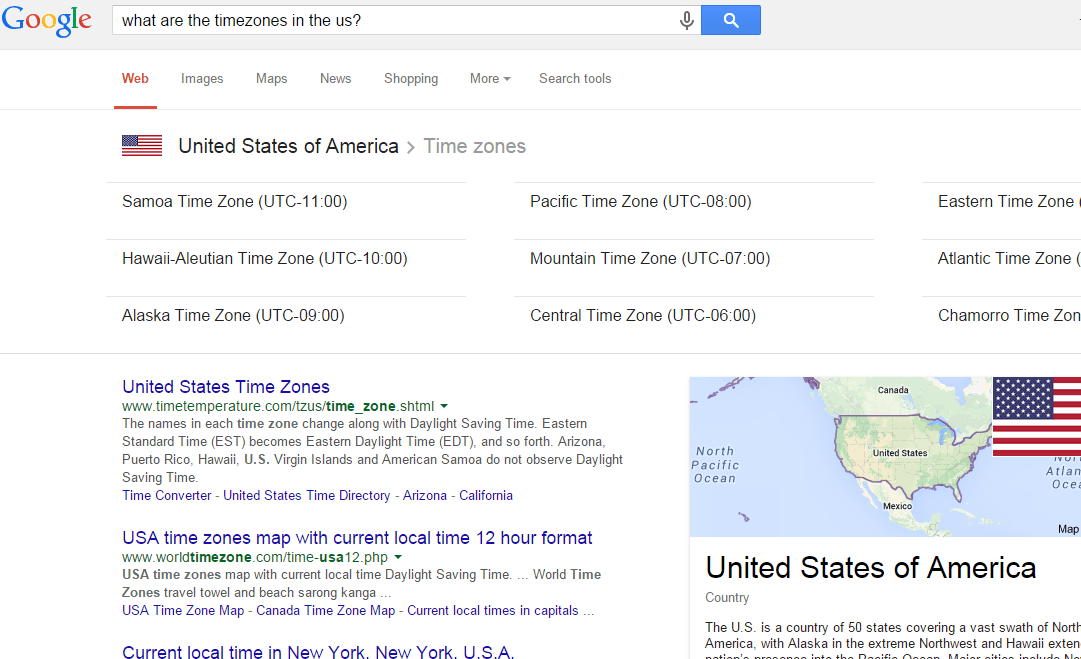 This ‘rich snippet’ will be so descriptive that it’ll probably eliminate the need for you to click through to a website to get the information you’re looking for. You’ll even get Wikipedia’s quick overview of US history for extra flavour, all without a single click. Of course, Google’s goal here is as clear as day – to make their user experience seamless and provide the best service they possibly can to consumers around the world. It’s easy to forget that Google’s search platform is a basic product like any other that’s constantly being tweaked to perfection. They want consumers to find what they’re looking for as quickly and easily as possible.

So, what do content marketers and SEO types need to be aware of?

“Okay, Google” is the new way of Googling.

October 2011 saw the arrival of Siri onto the iPhone 4, the first functional mainstream adaptation of voice recognition. It’s now a core feature across their range, from the iPad and iPod to the Apple Watch and all their latest handsets. Google followed suit with Google Now in June 2012 with great success, and Microsoft joined the party with Cortana in 2014.

A study by Northstar Research, which was commissioned by Google, told us that toward the end of last year 41% of adults used Siri, Google Now or Cortana on a day-to-day basis to find stuff on the web. That’s a pretty rapid penetration of the market given the narrow timescales and the infancy of the technology. This is perhaps partly due to the fact that the error rate has come down from around 25% a couple of years ago to as little as 8% in the past few months, which makes searches far more accurate.

Stone Temple Consulting recently evaluated over 850,000 Google search queries and worked out that Google delivered a direct or ‘rich’ answer 19.5% of the time. This, compared to last year’s 4%, tells us everything we need to know about the future of the search engine and how it’s planning to plate up information to consumers. Nearly all voice searches are carried out on smartphones, and people who search on their mobiles want information easily and instantly. Google addressed the ‘easily’ part with the ‘mobile-friendly’ labelling update a few months ago, and this seems to be taking care of the ‘instant’ part pretty well.

The format of these rich answers can adapt to best suit the nature of the query. For example, searching for local cinema listings can deliver a tabbed snippet of what’s showing which the user can access without ever having to click through to the site.

If almost 20% of searches are answered without any links at all needing to be clicked, and that figure is set to grow, where does that leave us? Any screen time that can be grabbed is going to be gold dust, which means that an impression could end up being the new click for many businesses.

If your main income stems from selling advertising space on yours or other websites, you could be in trouble. Song lyric sites are a particularly striking example, because Google are getting better and better at returning direct answers for song lyric queries. Asking, “What are the lyrics to All Along The Watchtower” will give you everything you need right there on the results page, which ruins any chances of a click through to your website.

In some ways, this move to direct answers and voice recognition is only going to make life harder for marketers. If you rely on information that’s in the public domain to drive traffic to your site, direct answers could eventually take over completely and leave your site rather redundant. But if your website becomes a ‘chosen one’ for displaying direct answers in SERPs (search engine results pages), you could stand to gain a lot of respect and brand authority. In many ways, it’s going to make black-hatting and exploitation all but impossible, and make Google even more valuable as a search tool.

Wikipedia is one such site which is already benefiting enormously. Last week my partner and I were watching The Green Mile at home and I’d completely forgotten who had directed it. “Okay, Google!” I ventured, my phone out of reach, “Who directed The Green Mile?”

My phone thought for a second and then began reading out the Wikipedia entry for The Green Mile, including the part about Frank Darabont directing it and the novella by Stephen King. With my Galaxy Note 4, Google is always listening. I never even had to touch the phone or turn on the screen – I asked, and Google answered.

There isn’t much room for advertising there… or is there?