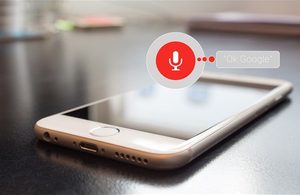 Voice-operated AI assistants like Google Home or Amazon Echo seem to be the latest niche tech trend to creep into mainstream usage, with 6.6 million people in the UK owning a smart speaker device (Source: YouGov 2018).

What Voice Assistants Are Out There? But what does this development mean for small business owners looking to make a name for themselves online? How does it affect the realm of search optimisation? Let’s look at how voice commands are set to change search and run through what we currently know about setting up your brand to play nice with voice search functions.

Before we proceed, let’s take a look at the four main players in the voice assistance arena:

Siri – Siri was the first mainstream contender, created by Apple and released as a part of iOS 5 back in 2011. It is accessible on a wide variety of Apple devices, and as of late 2017, it uses Google for its search functions (it previously used Bing).

Cortana – Next up in April 2014, Microsoft released their voice-operated assistant Cortana, named after an artificial intelligence character from the Halo video game franchise. Cortana can be used on both Windows mobile devices and Windows PCs and integrates with a number of Microsoft devices and apps. For search functions, Cortana uses Microsoft’s Bing search engine by default.

Google Assistant – This was initially released in May 2016 as a part of Google’s Allo app release, with mainstream access to its functions becoming more widespread in early 2017. It’s accessible through Google Chrome, Android devices, iOS, and Google Home/Home Mini. Unsurprisingly, it uses Google for its search functions.

As more of us are welcoming voice-operated assistants into our lives, voice commands – and by extension voice search – is likely to change how we optimise for search effectiveness.

Google Home and Amazon Echo (not counting the Echo Show) don’t have screens, so they can’t display a full results page in quite the same way as a screen-based device can. They, therefore, rely heavily on being able to read out an answer (as definitive as possible) there and then. This is where information taken from business listings and found through “featured snippets” becomes crucial to provide succinct answers.

Google’s “Knowledge Graph” functionality displays appropriate maps, business information, and opening times at prominent places within the search results page, and relies on businesses keeping their Google My Business listing up to date. Bing has similar functionality relating to listings submitted through Bing Places for Business.

This kind of visibility is important to online optimisation as a whole, not just in terms of voice search. But when a user searches through a voice-operated assistant for “businesses near me” (e.g., “OK Google, find a cafe near me”), claiming your Google My Business or Bing Places for Business listing is imperative.

In a similar vein, featured snippets are text-based results that appear at the top of Google search results and usually display in response to a question. They can take the form of a short paragraph, a table, or a list. Google finds what it believes to be the most succinct answer to a query (provided it’s formatted correctly) and displays it pride of place above all of the search results. Understandably this is quite a coveted position in search visibility!

With these factors in mind, it stands to reason that optimisation may be more angled towards long tail keywords – even full questions and sentences – rather than the 2- or 3-word strong target keywords of the past. We may even see a resurgence of the good, old-fashioned FAQ (Frequently Asked Questions) page.

It’s still early days yet, but recent insights are positive with 46% of internet users worldwide adopting a voice search tool or a voice-controlled smart assistant/speaker in the last month (Source: Globalwebindex 2018). How Can Small Businesses Prepare for Voice Search Optimisation?. It’s therefore important to keep an interest in how the trend of voice search progresses as a whole. When the first mainstream smartphone was released (the original iPhone in 2007), we would have never guessed the magnitude and pervasiveness of mobile web usage just a decade later, and some of the twists and turns we’ve seen as the platform grew. Voice assistant devices and apps are likely to be much the same.

It’s tricky to advise how to get ready for such a new concept, but there are a few best practices that you can follow:

Sidenote #1: Check out our guide to optimising your Google My Business Listing.

Sidenote #2: While you’re at it, why not claim/update your free listing here on Yell? Search engines often cross-check contact information with reputable listing sites such as Yell and Facebook, so take a moment to ensure you’re up to date wherever customers can find you online.