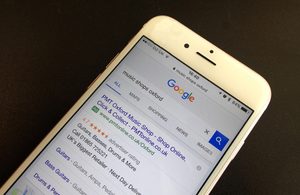 Ever since Google scrapped the right hand side ads from searches, there’s been potential to rethink standard ad formats. Previously advertisers were restricted to set characters counts of 95 for both headline and description text (not including the URL), but with more space available at the top of each page now, and more users searching by mobile than other devices, Google has taken the decision to alter ad formats to keep up with changing user and advertiser experience.

The result is the Expanded Text Ad – an advert with a larger character count and a different format.

Expanded Text Ads have two 30 character headlines and 80 characters of body text. Headlines appear next to each other or on separate lines, depending on the device.

These new larger ads are available now, but owing to the scale of the change Google is allowing for a long adjustment period so that advertisers can experiment and test the new ads alongside their existing ads. From October 26th this year [update 13/9/16: this has now been moved to January 31st 2017], users will no longer have the option of creating new standard text ads, and the Expanded Text Ads will take over as the predominant ad.

So are the new Expanded Text Ads definitely better for users and advertisers? And is it worth advertisers’ time rethinking their existing PPC ads?

Four reasons to wait before switching to Expanded Text Ads

So should you get involved in the new Expanded Text Ads right now, or should you wait a little longer until more data is available?

Whatever you decide, make sure you test your new ads against your existing ones so that you can get first hand data showing whether or not they work better for you. More space might mean more room for keywords and messages, but in practice more content isn’t necessarily better content. If you can say what you need to say in fewer characters you should still do so.