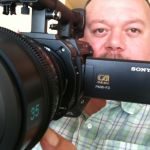 By this time, you should have everything organised, you’ll have had the brief and signed it off, the Video Producer would also have sent you a script (if required) a blank schedule for you to complete, so he/she knows where and what he will be filming throughout the day.

If you’re having testimonials, this would have been organised and if you are appearing the video, you’ll be rehearsed and know exactly what you’re going to say…of course, this is the ideal from a Video Producers perspective, but the reality can be somewhat different.

Small things can be often overlooked, like permission to film at a certain location, especially in large cities where the relevant council will need to be consulted and often require payment for a Video Producer to use equipment in public places…sometimes the Police need to be informed, though most councils, especially in London deal with this.

So my advice is to expect the unexpected as it sometimes does, however if we have a schedule to break down the day, then it’s a good guideline to follow, however if you have hired an experienced Video Producer, then they will know what to do in most circumstances, if things don’t go to plan.

Shoot days can be long and depending on the time of year (daylight hours) it can be 8 hours or so. It’s up to you if you want to be with the Video Team throughout, some of my customers, I’ll meet them in the morning and see them at the end of the day, while others like to be involved at every stage…it is up to you, but I recommend delegating your duties for that day, so as to concentrate on your video and arrangements for the day…plus, if your Video Producer is like me, you’ll be needed because I’m terrible at remembering names!

Your crew will turn up early in the morning and it’s here we generally have a quick chat about the day, go over the schedule, the locations and the people who will be included. If there are any pieces to Camera on Green Screen, I generally get this set up first, with the lighting and film any scripts towards the end of the day, to ensure I’m using as much natural daylight as possible.

In the 2nd part, i’ll be getting a little more technical about the tools and methods used.