It’s really hard for me to sit still to write this – too much big news has happened in social media this week already.

I’m typing this seconds after realising. I hovered over the Like button and actually gasped in shock as the new reaction options popped up: Like, Love, Haha, Yay, Wow, Sad and Angry. Like the seven emotional dwarves.

When I wrote about the possibility that Facebook would be releasing a Dislike button, I wasn’t convinced. I’m still not.

Between then and now, Facebook has clearly regrouped and come up with something they’re way more certain about – without notice, as far as I’m aware.

(Perhaps the Dislike thing was just to test the water and get people talking?)

The reactions concept that’s just been launched seems like a much better idea and is a natural continuation of the emoji revolution. Still, Facebook is a social legacy now: I can already hear the passionate journalistic diatribes about regressing to pictograms.

What it means for you

I’d say you could see an upswing in engagement with your posts; for the next week or so you might even see a weird number as people test the new reactions out. I Wow’d a random post from Nissan. Your custom steel fabrication ad will have never been so popular.

Yes, reverting to pictures is simplistic, but that’s why it works. When someone doesn’t quite feel a Like covers it but doesn’t want to write out a comment, they’d be likely to skip you.

Being able to loosely customise the engagement makes it a lot more likely it’ll happen, in my opinion. And hey, Facebook employs people smarter than me, so they’re probably sure it will.

In other social news: 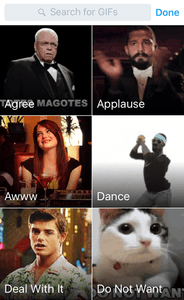 In what I would say is the strongest move Twitter has made in years, GIFs are now available to insert into any tweet or direct message.

We now have access to a huge library based on reactions, which you can search or browse. Oh, it’s magnificent. I’m holding myself back but it’s really, really hard. Instagram has taken their monetisation quest to the next level, providing what they say is one of the most requested features: video view counts. It may be an engagement thing (people don’t want to miss out on the thing ‘everyone’ is watching) but as more and more sites phase out share counts, is it a step backwards?

Another change will be the addition of 60-second videos for advertisers. Right now, most ads are slideshows or GIF-style posts, so full-length ads will be a big move. If you’re interested in advertising on Instagram, get in now to test the water: it’s still cheap and low competition at the moment so dip in a toe before everyone dives in.

That’s the news, over to Marvin with the weather!