You probably think in terms of which websites and which social media channels you can use to get your video marketing seen. It’s only natural, after all videos need a screen to be played, to be seen. There are other places where you can use your video however, and that means getting extra value from your video marketing production. I’m talking about going off-line. You paid for your production to share online but you also get to use it in a host of other places without having to pay extra. Sound good? OK, let’s take a look at five ideas for off-line uses of your marketing videos. The first place you should think of is trade shows. Not a revolutionary idea, quite obvious really, but very effective. Remember the advantages of video over every other form of marketing. It gets more information more quickly to your viewers than any other form of communication. It has a deeper emotional impact and resonance. It engages more quickly and more deeply. At a trade show you are one stand among many competing for the attention of a select slice of society who are your target market. So play your videos. Play them on several screens. Play them in all directions. Play all of your relevant videos so that you maintain variety. Make sure the people working on your stand are familiar with the videos so that they are ready for the queries and questions that may follow. Trade shows are an easy win when it comes to getting extra value from your marketing videos.

The above video I made for a highly specialised technical business who deal in pipe bending machinery. It’s an advert designed to be shown at a trade show and targeted at management who do not understand the technicalities of what some engineers do, but will understand from watching the video how much money this piece of software will save their business. The video can also be used effectively online as part of a directed marketing campaign but the use at a trade show was able to tap directly into the very specific target market at which it was aimed.

There are other places where you can use your video. Find out the power of going offline. Click To Tweet 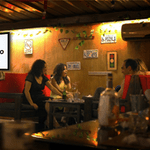 The second avenue you should consider is to put video screens up in your premises. Do you have a shop? Put a screen in the window. Do you have a restaurant or bar? Put screens up and in between showing the sport or the news play your videos. Do you have offices? Put up screens and play your videos. Are you a dentist? Then show your waiting room clients the quality of the work you do. Especially play your videos that focus on the cosmetic treatments that you perform. You have a room full of people all thinking about the treatment they are about to receive so use the opportunity to show them something more pleasant and aspirational than fillings.

Now why not explore the possibility of using other people’s video displays. Will local bars play your marketing videos on their TVs? Will they play them in the ad breaks? Do you live in a place where the taxis have video screens? Then your customers could be watching your marketing videos while they ride.

A third possibility to consider leads on from the idea of putting screens everywhere. Have you ever heard of smart shop fronts? No? It’s a brilliant idea. The technology exists to project images and video onto any window. You can turn your whole shopfront into a video screen that will play your videos, even when you’re closed. More than that you can add attachments that turn the window glass itself into a giant speaker to add sound. Then there is the real transformational element. It’s possible to add a film to your windows that transforms them into touch screens. Imagine your shop front is now a venue for potential customers to view your products and services. To interact with them and view a range of video content. You can do this more simply by placing a TV screen and a touch film in a portion of your window space, or you can be really adventurous and film over your whole window for projection and touch. Do you think this sounds a bit too much, or a little far out? The other night my fiancée and I were walking home from a party. We’ve been looking for a new house together and we passed an estate agent. In their window was a TV screen with a touch film. We were able to stop and browse through twenty or thirty different houses, and book viewings by inputting our contact numbers. That could be your business attracting extra customers.

The fourth option I offer for your consideration is local television stations. There is a long history of successful local television stations in the USA, but in the UK this is only a recent occurrence. Many advertisers are still not aware if they have a local station but almost every major city has at least one. You should be talking to them. What are their viewing figures? What is their demographic coverage? What are their advertising rates? Of all the small and medium size businesses I deal with on a daily basis, a significant proportion advertise on local radio but I’ve yet to encounter one who makes use of their local television station. This is down to viewing figures. They don’t see local TV as providing the return on their investment they need but it depends upon the station, and as always with television advertising it depends upon the programme. If you are a specialist business, and a local TV station has a programme or documentary that enthusiasts will want to watch, then that is an opportunity you can use.

The Return Of An Old Friend When I was a kid I’d go to the pictures and before the film there would be adverts. There still are. But I can’t remember the last time I saw an advert for a local business. In fairness when I was a kid the adverts for local restaurants (“just round the corner from this theatre”) were terrible, but if you’ve been following my advice, your marketing videos aren’t terrible. They are fun and have passion and style and entertain as well as inform and now they will stand out from the rash of adverts for national brands because they are local. It’s time to talk to your local cinema manager.

So there are five ideas for using the video you created for YouTube and Facebook elsewhere, and getting extra value out of your investment by doing so. Some of those ideas will may be a little wild. Some of them are still of the future and may seem strange. They may seem like they are not worth your time to investigate. I don’t know the ins and outs of your business, but what I do know is that the readership of the local newspaper that perhaps you still advertise in has collapsed over the last five years. National newspaper readership has gone the same way (read this), and while you may still think of the Sun and the Mail etc as national powerhouses of news and advertising, they aren’t. In the current market you need to maximise the value of your advertising spend and the truth is that print is seeing a notable decline. Traditional advertising is being overshadowed by new methods. It’s time to start thinking about every way in which you can leverage your marketing to get you new customers. Video is the most powerful marketing methodology you can marshall. Don’t hold back, use it every way you can to maximise your return.