Home » Knowledge Centre » Video Marketing » What Movie Tricks Can I Use In My Business Video?
Get a quote
×

The truth is that our business video is a movie. It is our short film, and we need to think in those terms. So why not use all of the movie tricks we can? Remember the last time you saw a movie and cried? What about the last one that made you laugh? How about thrilled, excited, unnerved or scared you? I want you to realise that the people who made those movies knew, beforehand, to within a few seconds exactly when you would have those emotional responses. They knew because they planned for you to respond in those ways.

We all know a bad movie when we see one, because this planning is wrong. We don’t respond. Our emotional engagement is missing. We probably don’t even bother watching to the end of the film. But when a movie is good it’s because the story has been created and told in a way that does engage us emotionally. The combination of character, story, music and visuals lifts us to another state of mind. I want us to look at a few examples of how this is done and how we can steal these tricks for our business videos.

Let's look at some movie making tricks and how we can steal them for our business videos. Click To Tweet

What Are Movie Tricks?

What I actually mean are fairly standard film making techniques that completely alter the way we look at things. All moving images are distortions of the real world. Framing choices include certain things but also leave others out. Editing removes time from any process or journey. Adding music enhances any emotion that is felt. In this sense they really are tricks because they play with the viewers ability to judge what is true. They are the techniques film makers use to control what we think about characters or how we perceive situations.So let’s talk about these three basic film making ideas to see how they can help us.

This is the simple act of cutting a piece of film or video and removing sections. Then joining that cut piece of footage onto another piece. The two elements may have been shot weeks apart and on different sides of the world. Sometimes we don’t even notice the cut and sometimes it is obvious.

Take a look at this edit from Lawrence of Arabia (1962) by David Lean.

This cut jumps geographically (by several hundred miles) and in time. We don’t even know, as viewers, how long has passed. That kind of massive jump should be jarring and disturbing to the viewer. The reason it isn’t is that Lean does something very clever. This is what is known as an “L-cut”. In this instance the sound of the match being blown out continues onto the new visual image, tying the two together. He gives us the same trick, but reversed (known as a “J-cut”) in Doctor Zhivago (1966). In that example a character drops ice into a glass but the sound we hear is of metal couplings between two train carriages. The cut that instantly follows takes us to the train station as the carriages are joined.

The edit can be used to surprise us, to fill us with wonder or to shock us. Every horror film ever made uses editing to shock us, but they also use the second of our movie tricks.

This is simply the matter of what does and does not appear on the screen we watch. We are all aware that on any movie set there are dozens of people, lights, microphones, cameras and more that we never see. We never see them because  the camera is positioned to not include them in the frame. BUT we can do so much more. We can choose to only include in our shot what we want our audience to see. 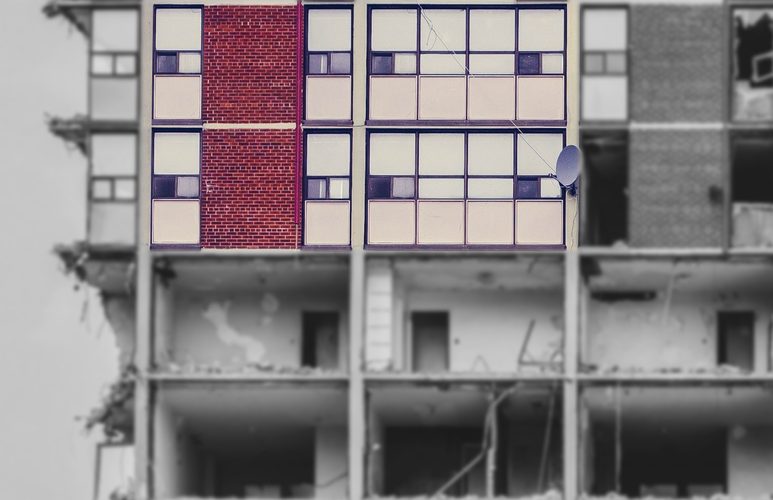 Take a look at this image. It’s a wrecked building, ready for demolition. But if we frame our shot to only include the portion That I have left coloured the building looks fine.

The last of my movie tricks is the use of music. Music makes a massive impact.  Take a look at this video essay by Stefan Laustsen. Its the same clip from Die Another Day (2002) over and over but with different music each time.

Some of the changes are subtle and some not but the way we interpret the scene changes each time. This can be a very powerful tool. remember the effectiveness of our video will largely depend upon how viewers feel as they watch it. There is no greater impactor on humans than music when it comes to eliciting an emotional response.

My intention today was not to try and teach you how to make your own business videos. There is far too much to cram into any article or even series of articles. But I hope you will find some of these ideas useful when it comes time to discuss you plans with the film maker you hire to make you business video.