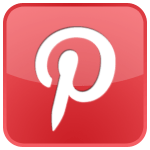 Pinterest is like a virtual pinboard.  Users simply take a image and pin it either to a board they have created or pin it to an existing board. If you have ever created a “Mood Board” for your self, perhaps to express to an Interior Decorator the styles, themes and colours that excite you, then you will have got the idea. There is no need to add text, but of courses you can, to add interest or highlight something from the images. So it is graphical like Tumblr, but more efficient in directly linking the things that people like (and through that, the people who actually like the things).

Pinterest state their mission as:  “to connect everyone in the world through the ‘things’ they find interesting. We think that a favorite book, toy, or recipe can reveal a common link between two people. With millions of new pins added every week, Pinterest is connecting people all over the world based on shared tastes and interests.”

Once an item is pinned up, other people can lie it or re-pin on another board. But what makes this useful from a small business perspective is that any featured items can carry a hyper-link back to you web site or e-commerce site. Note that Pinterest may take small cut of the revenue as if this was an affinity advertisement.

As a small business person, this should have your mouth watering…  IF…   you have the sort of products that people might pin.  For example, craft and designer items.  The site does tend to have a female bias, although that is changing as the site expands and the demographics tend to be those who also read designer magazines and so on. Still, we have seen that eventually, even non designer items, like chain saws or yard brushes can create a social media fan base with sufficient push and time. Lie other Social Media there is some etiquette and it does not do to overtly place sales material on your Pinterest site. The acid test is, will your potential customers approve or disapprove of what you attempt to sell on that particular pin board?  If you give them what they want- then the answer is obvious.

In some senses, small businesses are well placed to succeed in the Social Media battle compared to the efforts of large anonymous chain shop rivals.  But where small business have focus, large business have the time and man power to build those all important social connections.  The good thing about Pinterest is that it is simply about highlighting  interesting images and sharing them, not the social chit chat and extended networking features that Facebook offers. To my mind, it is focused, where Facebook and Twitter is broad for small business purposes.  Both have their uses.  But focused perhaps works better for small business

Overall I like Pinterest for itself – as an interesting way to observe revealing things about other people (perhaps my customers), but most of all, I like the way that it can open up a new set of potential customers to products in a subtle but focused way. While it won’t be as big as Facebook, I suspect that as a return on your time investment in Social Media, it might just be more efficient. And that can’t be a bad thing!