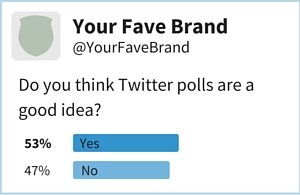 Some are silly – “Do you find Twitter polls annoying?” – and some are both useful for the business asking the question and interesting for the person doing the clicking.

They’re tweets with two possible answers that people can click to register their opinion anonymously. They run for 24 hours, after which the tweet turns into the results of the poll. You can set the answers to be whatever you want, rather than just yes or no, so it’s possible to be a bit creative with it.

I did one the other day for choosing which history programme should be given priority on BBC 2 – how wonderful! I had control put into my hands and I loved it.

I (of course) chose Suzannah Lipscomb over whatever else I was offered. She is a history BABE.

I wrote about this recently: we share things that we think reflect who we are.

So it makes sense that people would answer polls that show what they believe. It’s super quick, they get to feel like they’ve had their say and they’ve shown off their values to the world.

1. Opinion will be public (so phrase your answers carefully)
2. You can only set two choices
3. You won’t know if people find them annoying until you’ve done a few

Is it worth it?

You’re not going to get the kind of wonderful, rich feedback that leads to case studies and customer champions (the votes are anonymous, remember) but I think this is a great tool for getting a high-level view of how the land lays.

As well as the initial poll tweet, you’ll also be able to share the results of the poll once the 24 hours is up, then use your findings to generate even more content. For this reason alone (easy content), I’d say it’s worth dipping a toe in the water.

You could use them for testing the water on some new product ideas (“If you could choose one new product for us to launch, would it be x or y?”), to get a tally of attendees for an upcoming event, or to investigate how your community feels about a piece of news.

Generally, I think you can have a lot of fun with the new feature and use it to build up your brand’s personality like Innocent are. (Yes, I know I use Innocent as my example for everything but it’s because they’re really GOOD at everything.)

If you put some thought and imagination into Twitter polls, they could be a brilliant way to get more information out of your customers, generate content and entertain your followers. Tally ho!