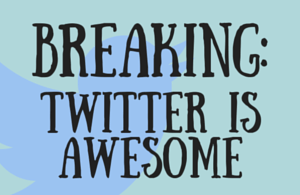 Last week I revealed – with breathless excitement – that there were rumours circling about Twitter changing how they count characters in their 140-character limit.

The limit on tweets is famously restrictive (that’s kind of the point, right?) but loyal users were upset a few months ago when Twitter mused on adding 10,000 characters to the game. Restriction is part of Twitter’s legacy and it’s generally loved.

However, it makes it a bit bloomin’ difficult for marketers trying to fit a message and a link / video / image into a tweet. Fine for a pithy comment on the latest Daily Mail sink-piece; not so much for revealing your new charity ambassador video and blog post.

And now, I give to you the best news ever

Well, they did what we thought and then some. It’s not just character counts that are getting a revamp; a few other Twitter trademarks are being modernised at the same time.

I have drafted so many awesome responses to tweets and then realised I’m over the character limit because of the person’s overly-long handle.

But NOW the @name will no longer count towards the 140-character limit. It’s a game-changer and I had no idea it was going to happen but I’m thrilled.

The one we knew about. Photos, GIFs, videos, polls and quotes will no longer count towards your 140-character limit. My biggest, biggest issue with Twitter – gone. Finished.

3. Retweeting and quoting yourself:

This came out of nowhere and I hadn’t even registered how much I needed it before it was announced. Right now you can retweet and quote other people’s tweets but now you’ll be able to recycle old posts of your own (like on Facebook) instead of having to write it as a new tweet. Useful for looking back on the old days, rerunning competitions and so on.

So, it used to be that if you were tweeting directly to someone, if you started with their handle, they would see it but your followers wouldn’t: it went directly to them. Soon, that’ll be out. Tweets that start with a username will be seen by everyone that follows you.

Some people are annoyed about this (the ‘direct’ thing added a thin layer of privacy, which I used for complaining directly to customer service Twitters instead of publically broadcasting their faults) but it gets rid of the annoyance of having to remember to .@ if you want your tweet seen.

Positive, I’d say. The character count changes are a really amazing compromise between ‘Ugh, can’t fit what I want in this tweet’ and completely changing how Twitter works. We do want more freedom – but not too much. That just wouldn’t be Twitter.

Twitter say the changes will roll out over the next few months and I. Can’t. Wait.