I want to put together everything I’ve been blogging about for the last three months and talk about how to create a video marketing campaign. I’ll be utilising all of the techniques I’ve talked about before; tailored story telling (see here), targeted video placement (see here), attractor videos (see here),  seasonal distribution (see here) and I’ll be adding the final element of the process which is strategic campaign planning.

First let me introduce you to “Borruck & Family”, a family-owned business manufacturing and selling Scimblers both to the public and business to business. This is a fictitious medium-sized firm that we will be following through the five stages of their video marketing campaign. The firm has a social media officer who is responsible for raising and maintaining brand awareness through a steady stream of business and none-business posts, releases, tweets etc. In addition B&F want to invest in some produced video commercials to attract new customers over the course of the year.

The first stage is for B&F to assess their annual sales in a useful way. B&F use age ranges, and location for their business customers, to divide their customers up into useful subgroups for analysis. 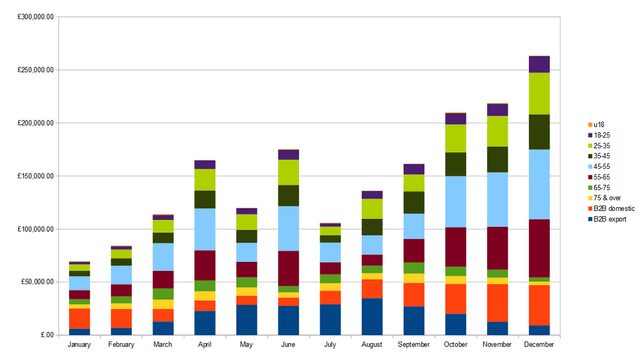 This graph shows the monthly sales of Scimblers broken down by customer age group, and by domestic and export sales for business customers. You can instantly see that this business has a very large sales peak leading up to Christmas, with a smaller peak in April and again in June. Winter and summer are the company’s quiet periods. However the business export portion of the graph shows that B&F’s foreign sales peak in the summer and tail off dramatically towards the end of the year.

The graph also shows that the April and June peaks are driven largely by an upsurge in purchases from the 45-65 age groupings with a smaller surge amongst the 25-35 group. While at the same time demand from those over 65 and under 25 along with domestic business purchases dies away dramatically. 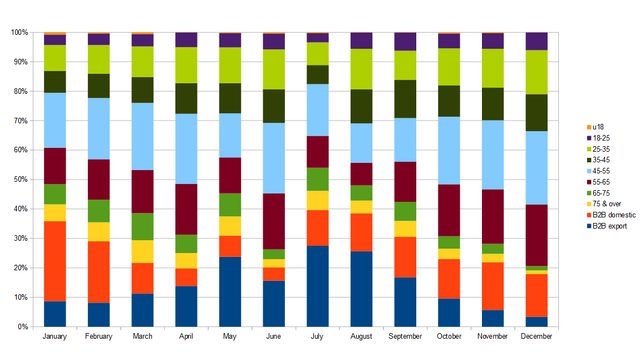 This graph breaks down sales as a percentage of total sales and shows even more clearly that the 45-65 group dominates the April and June peaks with 25-35’s and business exports giving support.

With this information B&F can now begin to look at when the best times may be to invest in video marketing. Producing several commercials over the course of a year can be a major investment and more  than ensuring a good return, maximising your return is vital. So for B&F the next stage is to…

B&F will use their assessment of sales and demographics to identify the best times to release their commercials to maximise their return. They identify October as a good release time to coincide with the general increase in sales at this time of year. The release will be followed by further boosted re-releases of the ad and some variant ads as Christmas draws near. They next identify March for a spring themed ad and May for a summer ad to catch the upswing towards the April and June peaks. In addition they plan a release targeted at export business purchasers to start in April and run throughout the spring and summer. Now that B&F have identified their times of maximum marketing value, it’s time for them to draw up their…

In conjunction with their chosen production company, B&F now plot the year in terms of when production for each of their four video commercials must begin. Also when the first cut of each commercial must be submitted to the marketing team. They plot out when and on what platforms the videos will be released, when they will be boosted or re-posted, when variant versions will be released and when to stop pushing the commercials across their networks. When I say “variant adverts” I mean alternative edits of a commercial that highlight differing aspects of the product or short videos that take some of the action from the main advert but last for only a few seconds to be used on Vine or Instagram. Planning variants is a useful way of getting extra value out of your production company by making several adverts from the same footage.

Once you have your release points plotted, you can work with your production company to plot in the stages of production. When will they submit their production briefs? When will they commence shooting? When do they need access to your business? When will you need to review the first cuts of any commercial? When you’ve finally agreed this (by now) complex timetable you’ll be able to start…

The question is… do you produce all of your video adverts for the year at once and hope to reduce production costs by block-booking your production company, or do you plan your year’s campaign with them and produce throughout the year in order to cater for any changes in the market or the product? My advice is always to produce throughout the year. Fashion changes, ideas become topical you need to get the best value from your productions and I think there is better value in staying up to date and fresh. This does mean that you and your production company must plan your productions very carefully. I talked previously about just how much is involved in the production of even a fairly simple video advert and you will have discussed this in the stage above. Now, as production begins, you have to ensure that you are making your business available when needed and that your production house is on schedule so that when your identified times of maximum marketing value come around, you are ready for…

Now, alongside their usual flow of publicity, the social media officer must begin the timed release of the commercials according to the plot. But this isn’t the time to sit back and relax. As each video is released it’s important that B&F use all of the analytical tools available to learn which of their releases garners the most engagement. Where each video plays best in terms of both geography and on which platform. Which section of each video grabs viewer attention best is invaluable knowledge when deciding if and how to make variants on the adverts for release through each season. Each element of the campaign is an active tool that needs to be used. I have used the word release to mean when a video commercial is made available on-line but the word seems to conjure the idea that the job at hand is then over, and it isn’t. Each release offers a host of new options, when to boost the post, when to release a variant, whether to re-edit for a different market sector: the way you use your videos will form a live and ongoing part of your campaign.

This time I’ve been writing about a campaign of video commercials, but I’ve also hinted at ongoing marketing activity. If you’ve been reading my blogs you’ll remember when I spoke about having a conversation with your customers and not just throwing adverts at them. Well, next time I’ll be giving some easy advice about where to find 3rd party content to share, how often to release it and everything else that makes up the cover-all phrase “ongoing video marketing activity”.