Home » Knowledge Centre » Facebook Ads vs Google AdWords: Which Is Best For Business?
Get a quote
× 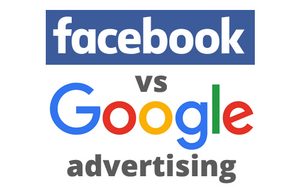 It has the reach and the targeting tools to ensure that your budget will go far, and towards as specific an audience as you like. With its powerful wealth of data, Facebook has made our target audiences more identifiable and tangible than ever before online.

With more network users and better advertising value (at present) than most other major platforms, Facebook advertising rivals Google advertising. But that isn’t to say that they’re actually in direct competition with each other – in fact they complement each other extremely well, as with a few exceptions their strengths are mostly quite different.

Probably the most important difference between Google AdWords and Facebook advertising is the target audience’s purpose for being on each platform.

The PPC audience is using Google because they have buyers’ intent – intent to research, intent to compare, intent to purchase. PPC ads reach your audience the instant they search for specific keyword terms you’ve specified. And this usually means that your advert is served to your audience when they’re likely close to the buying stage of the sales cycle, which explains why Google AdWords typically generates more conversions than Facebook ads.

Most people come to Facebook for a completely different reason – to socialise. So any ads being served up to your audience here may well be tailored to their specific interests, but will likely reach them at a time they’re not even thinking about buying. Hence Facebook ads often generate fewer conversions than Google ads. However due to this softer approach they’re often very effective at generating brand awareness with a new, targeted audience.

Facebook is very inexpensive, meaning it can be a great option for small businesses with limited budgets. If you haven’t invested much in Facebook recently it could be time to reconsider it for your business. Facebook Ads also give businesses complete control over daily budget and schedule, with ads able to be paused at any time. Facebook tends to be more cost effective per click than Google AdWords. However clicks don’t always translate into conversions, as on Facebook, advert viewers are typically earlier in the buying cycle.

In comparison Google’s keyword bids can be expensive, and require more careful researching and budgeting. However those who click on them are typically more likely to convert.

Both Facebook and Google ads offer excellent visibility of ROI, so you’ll know how each ad has performed very quickly. They also both offer good budget control, with visibility of cost per click and daily maximum budgets..

Facebook vs. Google PPC: Platform ease of use and capabilities

Facebook advertising runs through Facebook Ad Manager, this is far simpler to set up and manage than Google ads. If you don’t have time to do a full Facebook advert you can simply ‘boost’ an existing post using a few simple targeting options; there are pros and cons to investing in each ad type. Facebook is more visual, personal and social, with more scope for creativity and the ability to incorporate videos into ads.

However Google makes up for its complex dashboard with its more intricate reporting tools – it’s a better platform if you want to run an in-depth comprehensive advertising campaign with full visibility of every variable. Facebook advertising is simpler to use because it is simple and it offers fewer variables.

Both platforms have great features, analytics and reporting, although Google’s are far more expansive and granular. Google offers multiple ad formats and a host of other variables to optimise conversions. Google PPC has been around for over 15 years so it’s no wonder the platform is more mature than Facebook’s, which has only been offering advertising since 2012.

People don’t turn to Facebook when they want to find or buy something – they turn to Google. Both have huge audiences, but the chief advantage in numbers lies with Google, simply because nearly everybody online uses it. There are 3.5bn searches on Google every day – making Facebook’s 1.4billion active users per month seem trifling in comparison. Additionally Google’s adverts aren’t limited to appearing on Google Search – advertisers can also opt for them to appear on the Google Display Network (consisting of over 2 million websites).

Despite Google’s substantially larger reach, Facebook’s depth and breadth of detail about consumer information cannot be beaten. Its strategic targeting is incredibly powerful, enabling you to pinpoint people not only geographically and demographically, but also in terms of specific interests they have, other pages they might like, even their behaviours. There’s also a lookalike audience option, which essentially finds more of your existing customer base for you. The targeting process is different in that on Facebook you target interests rather than search terms, tapping into Facebook’s huge data cache on every member.

Facebook’s advertising has an extra dimension to Google’s in that it enables word of mouth endorsements – people can see ads and pages their friends have liked, giving them reassurance that it’s trustworthy.

Why Facebook and Google PPC advertising are both good for business

Both platforms are extremely powerful in different ways. Facebook’s wealth of information on its users and incredible targeting options contrast with Google’s access to buyer-ready searchers and its excellent analytics. If you’re a B2C organisation then both advertising platforms will likely work very well for you, although B2Bs may find Google to be more effective.