Streaming live video to market your business is not a new idea. From webinars to conferences and static webcams, there have been a number of ways to create and share live content for some time. But the recent launches of live streaming applications Periscope, Meerkat and MyEye (with investment from David Beckham) have put a new spotlight on live video streams as a way to reach new and existing customers.

As with any video marketing, you’ll want to have a clear plan and objectives for your activity, and look for ways to integrate all your activity. For example, promoting a longer, more detailed video on YouTube and other video sharing sites, using a mixture of shorter clips and live streams. Or by filming live interviews to promote your work with vloggers, celebrities and prominent people within your industry.

Periscope, Meerkat and MyEye – which to choose?

The two main live video applications currently attracting users and interest are Meerkat and Periscope. Meerkat was the first to launch, with about 2 million subscribers joining quickly. But it has been overshadowed by Periscope, which is operated by Twitter, which gained around 1 million users within the first ten days of launching. Twitter has also disabled some of the promotional options Meerkat offered on the service in favour of Periscope, which means it’s probably a better choice for brands at the moment.

But it’s worth keeping a watching eye on the other services which have now launched, including MyEye, which counts David Beckham as an investor.

One difference between the apps is that a video stream on Meerkat streams can only be watched live within the application and disappear afterwards. Currently Periscope videos last for 24 hours before they vanish, and can be accessed via the web, and MyEye will have an expiration of 72 hours for clips. MyEye is also more geared to individual broadcasters with greater controls over privacy and location.

Growth can be quick on new and emerging platforms. The first standout star on Periscope is Amanda Oleander, who has more than 250,000 followers on Periscope, but few fans on other platforms such as Twitter.

With any broadcast or filming you need to plan before you start. Any content you post to Periscope remains owned by you, but you grant the service permission to use it. And you’ll need to be aware of privacy, copyright, defamation and accidentally revealing business secrets when you’re broadcasting.

It’s always best to have a rough script or plan of what you’ll be talking about, both for you and anyone you’re talking to on your live video stream. Also check what may be shown in the background, particularly if you’re using an office or meeting room where whiteboards can be covered in business plans and details. 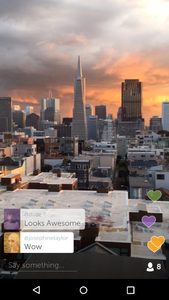 You’ll need to download the application for iOS or Android, sign up, and start building an audience. The best way is to start following relevant and interesting accounts to see how other broadcasters are using the service and see who takes notice of you. Whether or not you start a spare practice account and use that for your first attempts, you probably want to try a couple of videos without promoting them in advance, and test for issues such as lighting and sound levels.

When you’re good to get going, your broadcasts can be promoted elsewhere on your website, social media and other services, and make sure any interview subjects and celebrities also spread the word.

Finally, you can save video streams to your phone for future use, but various services have now started to help archive and share your broadcasts such as Katch (For Periscope and Meerkat).

Don’t worry about being too polished when broadcasting – the expectation for live video is to be real-time reality, rather than perfect performances.

Various companies have begun to market their products and services via live video. Orange France integrated Periscope with a TV campaign, allowing you to help the star of the television advert through a romantic date.

Doritos have run a campaign featuring nacho corn chips as roulette wheels, with random winners selected from those viewing the Periscope live.

The likes of Adobe have used live video to demonstrate new products, Taco Bell hosted a fake press conference, and brands such as Red Bull have made use of the athletes it sponsors for content.

For small and medium-sized business, it’s worth starting with the marketing staples which are already essential for video marketing – product demonstrations and tutorials which will allow you to show how to use your products or services, and field questions in real time.

How to improve your live video streams:

With any marketing you’ll want to keep improving. Metrics such as viewer count, average watch time and number of replays will help you identify which content works best for those following in you.

The viewer count can easily be improved by more promotion and integration with your other marketing channels, while examining the live chat questions and responses will provide clues to increase the average viewing time. And testing discount codes and other response mechanisms will help to identify sales or enquiries which occur from your live stream while it also improves your engagement with existing customers and community.

Have you experimented with the live streaming video apps for yourself or your company? Have you had any problems? Share your questions and experiences in the comments below.